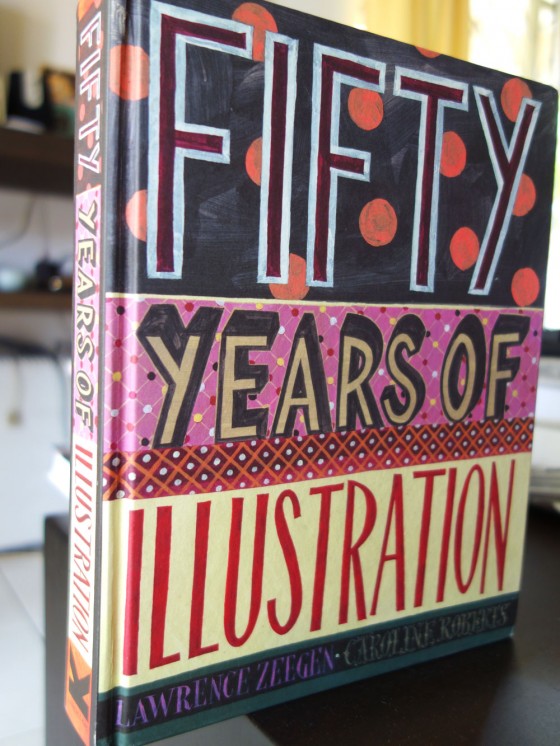 Fifty Years of Illustration by Lawrence Zeegan & Caroline Roberts celebrates illustration and illustrators throughout five decades. Rather than padding up its pages to include engravings of eighteenth-century artists; the realistic traditions set by the great Victorian illustrators and the stylishly academic (although no less avant-garde) works from the 1920 to 1930s – the book begins in 1960; where cultural revolutions in the East and West began to stir.

Just like art that chronicles each decade with aesthetics that define the times, so it is with illustration – along with its illustrators. The past 50 years has seen many changes in technique, details and ripples within the profession itself as it hinges on relationships with many other industries that are changing still. From the heyday of the Madmen era to the introduction of the Apple computer that forever changed how graphics are created forever; illustrators more than ever need to be quick on their feet; and to think of how they can fit in with the world at large.

While it is no secret that there are diminishing opportunities within traditional illustration outlets, there are new opportunities as well, as we become more comfortable in the digital age:

For the new wave of illustrators, working in the digital domain was second nature, having grown up with a computer in the bedroom, playroom and classroom, and having trained in the studios of art schools where digital and analogue technologies sat alongside each other. For these new practitioners, the challenge was in the crossing of boundaries and territories, working in advertising, design, music, fashion, and publishing, as well as traversing from the commercial and to the non-commercial and self-initiated, self-publishing projects. This new breed of illustrator works globally, and yet lives locally. No longer required to live where the work is, illustrators can work anywhere, anytime and for anyone. ~ Introduction, 50 Years of Illustration

I appreciated that the given introduction to each decade sums up the circumstances and influences that spearheaded the illustrators of its generation. So while the book doesn’t tell you how the future would be like in the next coming decade, it offers you a broad, long, lingering look of what others have done before in the past. It’s up to you to connect the dots and to see how you can envision yours as you move forward. Illustrators need to be conscious and relevant of what’s happening around them – and not just of clients. They’re very much artists of the world at large; communicators if you will – who bridge the gap for people to connect visually.

And this is what I loved best about this book.

Pros: The subject matter of the book is refreshing as it concentrates on the past 5 decades instead of a longer timeline; and thus was able to showcase more illustrators – 250 of them – and their works.

Cons: This is a minor gripe, but I didn’t really like the feel of the inside paper – while it was a retrospective look at illustration, I had hoped for a book that didn’t seem to come out from the 1990s; also, there was a bit of transfer between pages (particularly for full colored pages that were bordered in black).

The book will only be out on October 28th, but you can pre-order 50 Years of Illustration via Amazon.