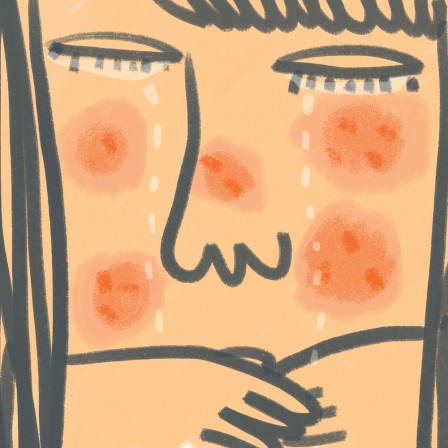 A lot of people I know have fond memories of being in high school (also known as secondary school to Malaysians).

Not me though. I hated most of it.

I felt alone for most of my time in school. I often felt like I didn’t belong in any particular group. I wasn’t among the pretty girls group, nor was I popular. I wasn’t one of the smartest either. I wore braces and had horrendous cystic acne that threatened to disfigure my face. I woke up almost every morning to the sight of a spotty, bloodied pillowcase – signs that one or a few pimples had burst in the middle of the night. It was painful. If the pain wasn’t caused by the acne, then I was pretty sure it was because of the embarrassment I felt whenever I caught a glimpse of myself in the mirror.

I didn’t look in the mirror for a full year when I first had it. I turned away everything that had a reflection, and was conscious about bumping into anything that might show me what I didn’t want to see. It wasn’t your run-of-the-mill pimple on the chin, or that pink dot on the nose – this was far worse.

Imagine one pimple threatening to erupt on your cheek; a stirring, angry red mound appears. Only it’s not the only one. This slow burning soon-to-be volcano is then joined by another peak that has threatened to form, right next to it. And another. And then another. Within a few day, these few peaks begin to expand beyond their zones, as though reaching out to its comrades in arms in familiar embrace – and form a big giant mass of pimples, pus and cysts that when magnified would seem to look like a scene out of the insides of a volcano.

It was painful. It was everywhere.

But having cystic acne made me strong. It made me realize that if I were to shine I had to try harder than everyone else, because I didn’t want acne to define who I was (the girl with some sort of disease on her face). And I certainly did not want it to tear my self-esteem – whatever was left of it – into shreds.

I was nicknamed Iron Lady by a teacher who saw how strong minded I could be. I wasn’t afraid to raise my hand to ask questions, and stood up readily to give answers. I challenged the things we were being taught, and I spoke freely. I didn’t want to be known as that girl with acne. I wanted to be known for what I could become. Not something that had taken residence on my face, chewing my insides, and leaving angry bumps that would forever have scar tissue in them. But not only did it consumed my face – it consumed me.

I can still feel the cysts left behind if I press into my skin deep enough.

One day, I sat down on my bed and cried. I told my mother that I couldn’t bear to go on like this – and that there should be a way to help with my condition. I tried everything – antibiotics, a change in diet, changing my sheets, my skincare regimen, pimple creams, everything. I have not seen anyone had it as bad as me (and I still haven’t encountered anyone who has) and all I wanted to do was to stop it from mutilating my face for good. I could hang in there while it runs its course, but what if it didn’t? What if it robbed me of more than just my face? I knew that one day those scars would leave me (hopefully), but what would I leave behind? What if it robbed me of my confidence, or my self-esteem before I could accomplish what I wanted to? What if it robbed me of opportunities? What if it chipped away at my insides until I was just a shell? The world was a harsh place – if high school was anything to go by, the outside world didn’t look that promising then either.

As my meds kicked in over the next few months, it was a relief. No more pains. No more bloody pillowcases. It was an unconventional treatment at the time, but it worked for me. I became a silent crusader against acne ignorance whenever I could. I yelled out at ignorant fools (and very nearly grabbed them by the collar) who kept saying that the fault lies in the sufferers – that our skin was dirty, and that the solution was that we should wash our face more often. If I thought that would help I would have washed it every minute!

And so it is with everything in our lives. We have stories to tell. Of wars waged against others and ourselves. Personal stories that go untold because we think it isn’t important. Oh but it is! Each and every experience that we have is something we have to share – if not for ourselves, then think of the people you can help. Think of those who are at their wits end. It may very well be that their problem might seem small, but to them, it can feel as though the weight of the world are on their shoulders.

Whether it’s a war at home, or at the office, whether it’s a something that’s visible or isn’t, big or small; people around us are embroiled in battle one way or another. Acne taught me to be kind. Because I wished for kindness when I was battling it.

My scars reminds me of that constantly. And I’m ever determined to leave a mark of my own.

What about you? What scars do you carry with you?

What do you do, exactly?

14 Replies to “The scars we carry with us”