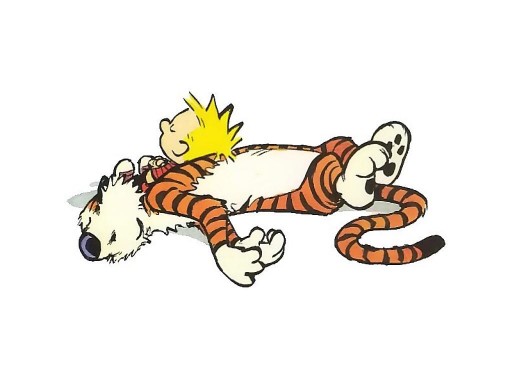 The short answer is: You can’t.

When I heard the news that Bill Watterson  would be retiring, I took it really hard. I felt my heart sank and it just wasn’t something that I could stomach. So I acted out – I bought the remaining anthologies of his book needed to complete my collection, and waited in eager anticipation of his last book. I cut out all the comic strips that was in the paper (because I wasn’t sure it would be collected in book form later on, so I had to hedge my bets – it was the era before the internet, after all).

And then I decided that the series should continue, with or without Mr. Watterson.

I would have to do it.

I began right away – I got my supplies ready. Ink, check. Brush, check. Drawing pad, check. It took me more than 6 months of drawing everyday to get Calvin’s hair almost right. But it never was. Hobbes hands would never look as slender, nor would his expression give off the charm that only he had – my version was always shorter and fatter, with none of the proud look of a tiger doll. The only time it looked almost similar to what Mr. Watterson drew was when I traced over his comics. Yes, I was a shameless copycat – but it was all in the name of learning, and I was just 13.

Those drawings never saw the light of day because they didn’t look right. I had dozens of notebooks with sketches of Calvin (I was obsessed with that hair!) and Hobbes (the only thing that came close to looking good was his tail) – most of them half-drawn and abandoned when I felt that it wasn’t turning out the way that I was expecting them to. I didn’t use an eraser because I thought those were for wimps (how hardcore was I?!) and I felt that there was something Mr Watterson wasn’t letting on about his process. I was frustrated. I felt like my hand wasn’t listening to what my brain was saying. Move here! Hit the curve right there! Darn it! I wished that I had a transmogrifier so that I can turn myself into someone who spewed out perfect C&H comics.

I gave up about a year in. I drew my version of Hobbes mainly on birthday cards for my parents – but that was about it. I didn’t get rich, and I certainly wasn’t able to convince my mom and dad that I was the next comic genius or one who could succeed Mr. Watterson in continuing the lineage of the Calvin & Hobbes series.

But what I did learn from the experience was that it’s super hard to copy someone else.

Even with all that effort (a year’s worth of time, ink, and lots of paper), I didn’t make a dent in the universe. I did try, but I was just making a really bad replica of someone else’s work (Mr. Watterson wasn’t just someone, IMHO, but I’m digressing) and I more importantly, I was always a step behind.

I was living in someone else’s shadow.

If you’re copying because you’re still learning, carry on. That’s what I advise students who don’t know how to get started, and I always end with a caveat: just don’t put it online! Now, if you’re done – how about you step away from the shadows so that you can shine bright on your own accord?

Pssst. Hankering for Calvin & Hobbes? You can read the comics right here. And also Bill Watterson’s interview with Mental Floss in 2013.

4 Replies to “How to draw Calvin & Hobbes”