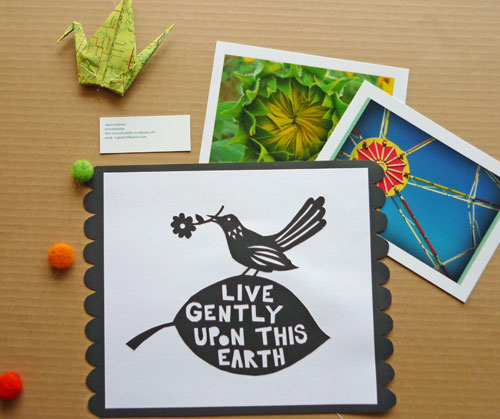 How about a brief introduction?
The word artist tends to get stuck in my throat when I try to use it in reference to myself, but it’s what I’ve wanted to be all my life. I became infatuated with papercutting the minute I cut out Amy Karol’s (Angry Chicken) mailorder pattern of a bunny on a swing. Starting out using existing patterns I soon realized that I could create my own patterns and ideas, and that engaged all the wheels in my brain. I’m still experinmenting and trying to find my own definitive style of papercutting.

What does going green mean to you?
For me it starts with a reverence of the natural world, and an understanding that there is an intrinsic connection among every living thing on earth. To make choices whether personal, business, national or global out of that understanding.

What projects are you currently working on?
Woodland “coat of arms” papercut, a series of house papercuts, a couple of commissioned papercuts and photographic postcards.

What’s your favorite tool?
X-acto knife and a #11 blade.

What 3 words would best describe you as an artist?
Curious, evolving, patient. 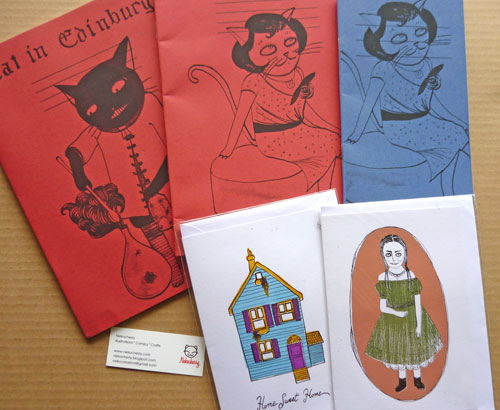 Name: Nekocherry (my real name is Aurora, it means dawn in italian)
Location: At the moment I live between Bologna (Italy) and Edinburgh (Scotland), althought I am originary from Sardinia. Lively life!
Website: www.nekocherry.com

How about a brief introduction?
I am a psychologist, training to become an Expressive Psychotherapist and Art Therapist. My passion for illustration and comics was born with me. When I was very young I attended the Sardinian Comics School, directed by Bonelli Comics Publishing.

In 2009 I started to create hand painted t-shirts and tote bags and I registered the brand Nekocherry, that became also my nickname as freelance illustrator. In the same year I began an autobiographical comic, “My life in Edinburgh”, that I still publish in my blog. I studied illustration, Creative Digital Drawing and Artist Book for a while at the ECA (Edinburgh College of Art). In 2010 I became member of Edinburgh Printmakers and I started screen-printing. My work is influenced by many personal life experiences; during years of university I studied theatre and acted in famous theatres in Milan. I worked for many years as a freelance journalist.

At present my time is spent between working as a freelance illustrator and activities of creative workshops. I am also creator and curator of “Life on Comics”, a workshop about autobiographical comics.

What does going green mean to you?
Green is happiness, is nature. My dream is to live in a wood and rock house, in a small medieval village, in the middle of nature. Also I love animals (cats in particular, as you may have noticed), so green is also great for the wellbeing of animals.

What projects are you currently working on?
A small booklet about my life in Edinburgh.

What’s your favorite tool?
Ink and nib, beyond a shadow of a doubt.

What 3 words would best describe you as an artist?
Enchanted, alchemist, whimsical. 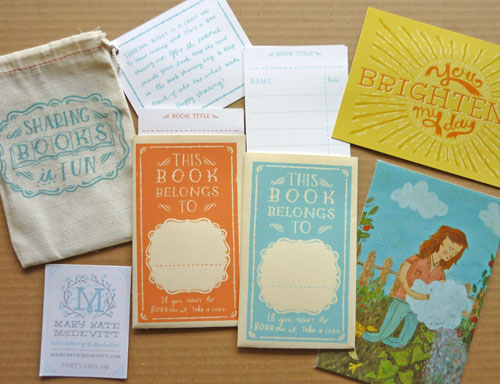 How about a brief introduction?
Hello! My name is Mary Kate and I’m an illustrator living and working in Portland, OR. I specialize in hand lettering which I hand paint on Mini Goals Chalkboards. I’m inspired by vintage design and nature and work next to my boyfriend Fred and my cat Peppy doesn’t do much work but she’s my little motivator.

What does going green mean to you?
I’m a big fan of reusable objects and keeping it simple. I feel it is easy to be green by just making a few subtle changes to your everyday life.

What’s your favorite tool?
A pencil it goes well with an eraser. I use it constantly.

What 3 words would best describe you as an artist?
Humorous, colorful and odd.