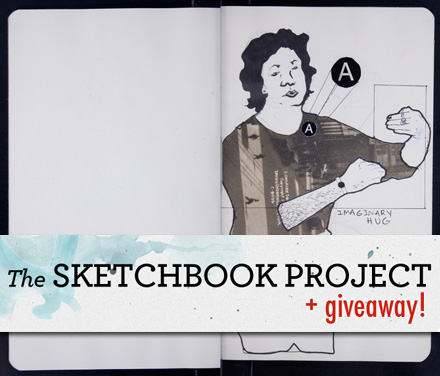 The last time when I participated in the Sketchbook Project. organized by the friendly folks at Art House Co-op, it was 2009 (you can see my sketchbook here). And right now as I’m typing this, they’ve recently opened up submissions for their 2012 Sketchbook Project (which is 100% community funded by the way) – which is akin to a concert for sketchbooks. They bring it around cross country in the USA, scan them for you (for a small fee) and basically treat them like royalty – showing them off at whatever chance they get. Best of all, 2012 is the year where they’ll break international boundaries and will exhibit at places like London and Melbourne.

They’ve teamed up with Pikaland to offer YOU – our lucky readers you – a chance to be a part of the Sketchbook Project. And we’re not talking about just one miserable sketchbook giveaway. There’s FIVE with each one to be given out to FIVE lucky reader who answers this question in our comments section:

Why do you sketch?

And not only that, we’re going to be following the progress of these 5 winners – and they’ll be profiled on Art House’s site as well. Your sketchbook be grouped in a special Pikaland archive (locally and online) and of course, be subjected to a royal treat that every sketchbook deserves.

Sounds great? What are you waiting for? The giveaway ends next week on 9th August.

For those who are anxious to start the Sketchbook Project right this instant, you can get a copy of your sketchbook here with a special 10% discount just for Pikaland readers – enter discount code PIKAFRIEND during checkout and bada-bing!

{The above sketchbook spread is done by Mikey Maruszak, and taken from Art House’s website.}

*UPDATE: Commenting has now closed, thanks so much for participating. The winners of this giveaway are Jodi, Alexandra, Saga, Mareike and Sarah, as chosen via random.org!