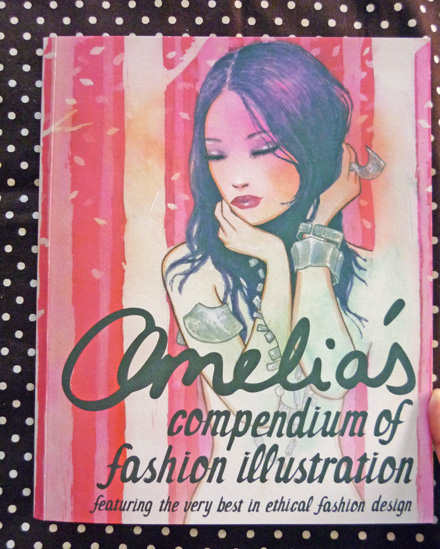 Amelia Gregory is back with her second book after the success of her first book — this time focusing on fashion illustration and environmentally conscious designers who are making waves in the fashion industry.

The book features the work of 30 up-and-coming illustrators, alongside 50 profiles of ethical fashion designers, and we’ve arranged a little chat with Amelia where she shares with us her inspiration and also her hope for the fashion industry. Also, read our review of the book after! 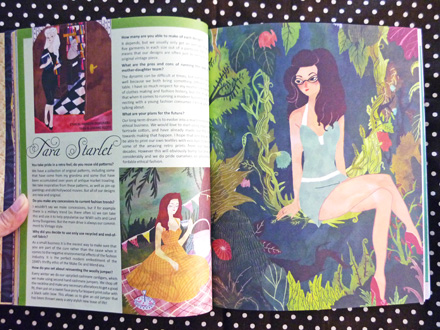 Who’s your target audience for the book?
My target audience is anyone who is interested in illustration, fashion or ethical design… so hopefully Amelia’s Compendium of Fashion Illustration will appeal to a lot of different people. I hope that my readers will be introduced to some ideas they may not have been so familiar with when they first picked up the book. In fact I know this is already happening, which is extremely heartening. For instance reading ACOFI inspired illustrator and presenter Ani Saunders to dedicate an entire episode of The Muse TV to vintage and ethical fashion

What do you hope to change with your book?
I hope that reading my book will inspire people to rethink what ethical fashion can be – it’s no longer all about hemp sackcloths, and I very much hope that this book will prove that. It would also be nice if those people who are in the position to commission illustrators were to realise the potential of fashion illustration to communicate so much more than photography can. I’d like to see the renaissance of fashion illustration and I think there are little inklings that this is starting to happen. 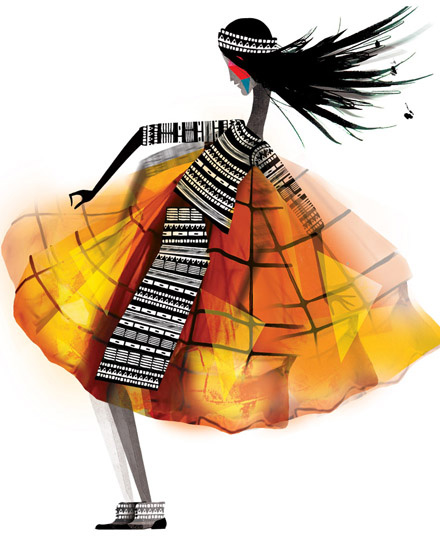 How has the response been toward the book?
So far everyone who has seen it seems to really love it and I know that it has inspired people to take action: for instance ACOFI has inspired Fuyume to redefine the subject matter of her blog to encompass ethical fashion. I hope that I can inspire many more small changes that might eventually lead to bigger change.

How important is illustration in the world of fashion?
At the moment it is definitely less important than photography, but that wasn’t always the case. I hope that as photographs get harder to produce to the exacting standards required by the industry, that the possibilities of fashion illustration are once again explored as an alternative. I think there’s a possibility that this will happen because you generally need a huge team to create an upmarket fashion photograph: from styling, hair and make up on the day right through to the lengthy post production retouching stage. An amazing illustration can be produced by one illustrator who also acts as a stylist, bringing their own element of imagination to an illustration. The results can be incredibly unique and dazzling. 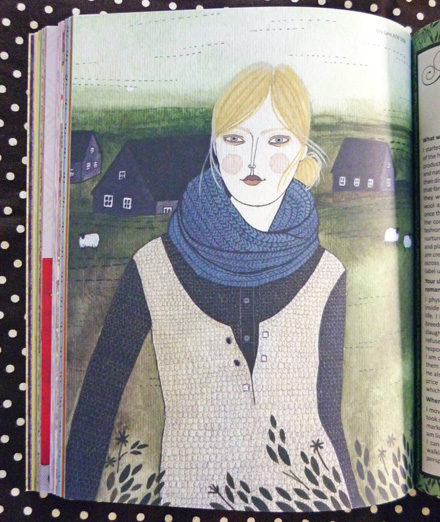 What’s your criteria for the illustrators that you chose for the book? Did they need to have a background in fashion illustration in order to be chosen?
Each illustrator had to submit of a selection of images featuring the work of their chosen ethical designer, and then some more of their personal work. I was also very clear that they should already have been working for Amelia’s Magazine online – and the illustrators who were chosen have all worked extensively with me. 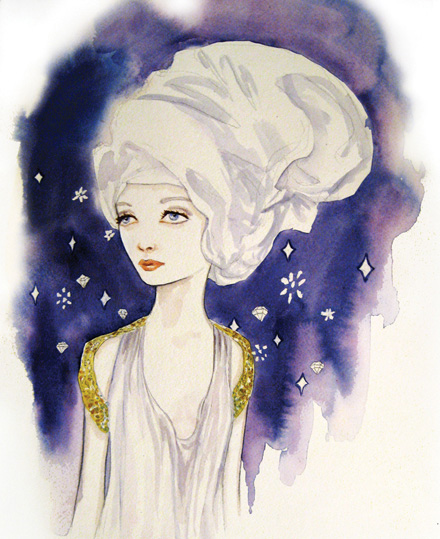 How can we be more ethically aware of the clothes we put on our back? What can we, as a consumer do to spur more awareness?
We all make decisions every day that change the world. I think it’s important that as consumers we chose what we buy carefully – that we don’t buy more than we need and that what we do buy is of good quality, will last a long time, and in the best possible scenario is also made through an entirely ethical process. Of course we can also ask that our favourite brands put more care into sourcing materials, but I think it’s important that we don’t put all the onus on the individual consumer – part of the problem is the way that large corporations are run purely to maximise profit, so what we really need is systemic change. The endless growth promoted by capitalism will ensure that corners are cut when it comes to the environment if we don’t challenge the reigning paradigm. 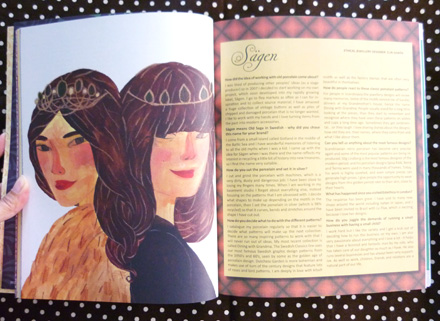 What’s next for Amelia’s magazine (or for you?)
At the moment I am still working on the promotion of ACOFI and that will go on for sometime yet. I am just about to set off on The ACOFI Book Tour, which will travel around the UK during May and June. I’ll be visiting the best independent art and design book stores, including Tatty Devine in London, The Fruitmarket Gallery in Edinburgh, Castor and Pollux in Brighton, Comma in Oxford and Soma Gallery in Bristol.

I start at Tatty Devine in Covent Garden on 10th May, and end at Tatty Devine in Brick Lane on 7th June. I’ll be doing informal talks about illustration process, eco fashion and social media for creatives, alongside a formal book signing and portfolio review session. I’d love to meet lots of up and coming creatives so if you would like to know more about the tour please check out my blog. I hope to see you there! { Link }

Then of course I write and commission for Amelia’s Magazine online on a daily basis, and I am always thinking of ways to improve that. Beyond this I hope to do more lecturing, writing and consulting for other people in the upcoming years and beyond. Oh, and I am about to work on a new range of greetings cards for Roger la Borde too. 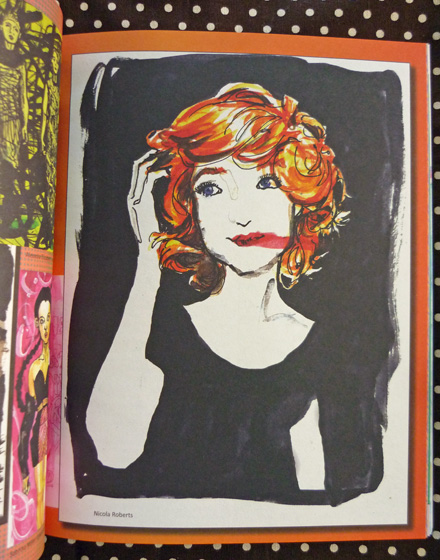 Amelia’s compendium of fashion illustration is her second book after her first {read our interview and review}, and there’s quite a bit of difference between the two. Her latest book features a soft, pearlescent cover, rather than a hard cover which is definitely a plus point if you’re going to be carrying it around for inspiration.

It’s great to see Amelia’s continuous exploration into the topic of environment friendly made goods – her first book talked about renewable technologies to prevent catastrophic climate change, and in her second book, she’s narrowing her focus on fashion. The gradual shift was natural for Amelia whose background consisted of studying printed textiles for fashion at Brighton University. 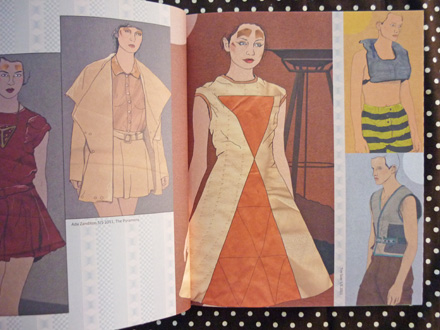 The beauty of the book is that it isn’t all just about illustration – there are interviews with illustrators and the fashion designers (featuring pieces illustrated by them), and the combination of both makes for an interesting format that I have yet to see anywhere else. There’s plenty of illustration to go around in the book, and it’s nice to be able to see illustrators stretch their wing more than usual – they’ve been given on average, about 5-8 pages to showcase their styles and skills. 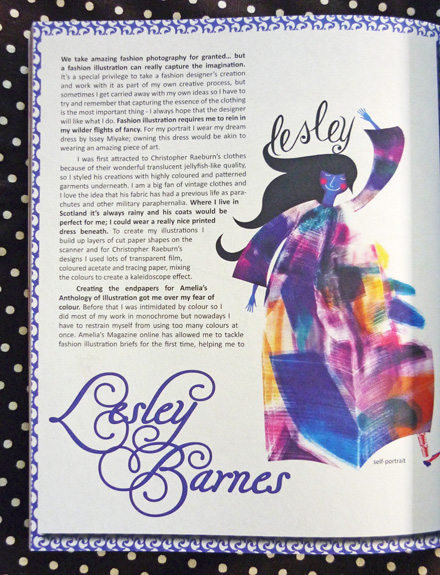 As always, it’s good to see works from up and coming talents as they experimented with fashion illustration – I could see that some of the illustrators featured seemed a little less confident than others, while there were others whose style and confidence came naturally. I was pleasantly surprised by the work of Lesley Barnes, who showed incredible flexibility when it came to working with fashion, without ever losing the quirkiness and strong geometrics that has come to define her style.

It’s gems like these that keeps me hooked on turning the pages of the book. And of course there’s no better way to engage readers than to combine two very interesting disciplines in one tome that’s pure eye candy! 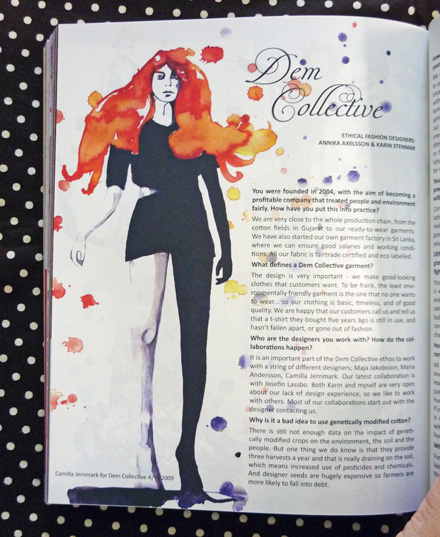 Pick up a copy of Amelia’s Compendium of Fashion Illustration over at Amelia’s Magazine.