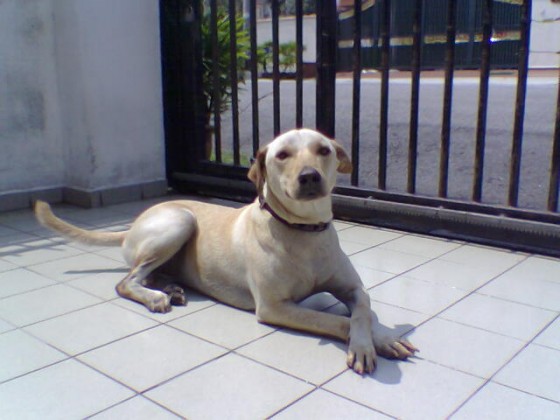 Ten years and six months ago today you came into our lives and into our household – in a pail. Michelle had seen you wandering in her campus and decided that no, you will not be wandering around like that any longer. So she took you home and gave you a chance. And my mom loved you. We all did. I gave you your name.

We had to shield you away from Bessie because we were afraid she would eat you, and so we kept you in the house until she got used to the idea of having another furball in the house. However it didn’t last very long – once I stepped on your poop all over the carpet I had decided enough was enough and out you went to join Bessie on our porch. It wasn’t exactly love at first sight for you and our one-year old Bessie (not for her anyway) but you were still alive and she didn’t take you as too tasty so that was done.

You were the silliest dog I’ve had the pleasure of knowing. A year into your stay with us we noticed that you constantly smelled bad in the morning – we caught a whiff of a mixture of garbage and everything else in between. But we just thought you had body odour. Then the neighbour caught you gallivanting outside one night when everyone was fast asleep. Apparently you slipped through our gates every night and had a field day wandering the neighbourhood, and came back before dawn. You sly little minx you. It ended when one day you couldn’t get back in. The neighbour found your head stuck on the gate – your body a little too heavy from the day’s taking to slip through. They slathered oil on your head and tried to pull you out, but to no avail. All they could do was to give you water until mom came home. You were quite a sight alright – your head was inside the gate, but your body was outside. When mom came home, you were so afraid that you just popped your head right out! And you never smelled bad again.

You taught Bessie to howl when the bread man came on his motorbike. You made noises when you were happy. Whiny, high pitched noises that would culminate in a bark when you were excited. You’d go round and round, two front paws on the ground and your hind legs ready to pounce as mom and I got ready for our (almost) daily walks. And every morning as you greeted mom as she opened the door, you’d rub your face in her leg and make those sounds as though you could coo and talk.

We called you the ABCD dog, because you’d seem to be far off sometimes. Your face suspended in deep thought, we coined that term for when you’d look into the distance. A, B, C, D… where was I again? Oh A, B, C, D. E Maybe? Michelle mentioned you look like Hitler at certain angles with that tuff of black fur at the top of your mouth when you were in deep thought. You were so much nicer to look at though (no contest there).

We almost lost you one day when the vet bundled you off with a muzzle on your face. You sprang free and ran, ran, ran away. 30 hours later of constant searching, we found you with a help of a security guard who saw you with your bounded mouth. You were bleeding from an earlier wound, thirsty and hungry. We were so happy to have found you. So thrilled at our luck of finding you, and thankful that we were given a second chance to be together.

And did you remember the time when you and Bessie caught a squirrel? It was still alive when one of you ripped open its chest, its heart on the ground still connected to its body. I thought it was already a goner, but no. It got up on its two front arms and proceeded to look about – and managed to even drink water from the puddle near it. I was hysterical at that point. I called for Mr. T on what I should do, the squirrel was clearly almost dead, except it wasn’t. Can I rescue it in time? Should I let it suffer? At this point both Bessie and you were both at one end of the compound, looking on. You got up, sauntered over to the squirrel after a couple of minutes, and put its head into your mouth. I heard a crack. And then you walked back to your spot. The deed was done.

I had mentioned to mom 3 months ago about how great you looked. “She never seemed to age,” I said. Your body was sinewy, well built with muscles that reminded me of a horse. You were tough and strong. How quickly things turned. That lump on your neck was most probably cancerous, the vet said. We could never know because surgery on the neck area was never an option even if we did know. 6 weeks ago we found out that the cancer had spread to your lungs – the X-rays showed shadows of cotton balls floating about, suspended in mid-air as they filled your lungs. There was nothing that could be done.

You had begun to lose weight 2 months ago, and had gotten progressively thinner. It could be thyroid, or lymph nodes, the vet said. But it was cancer none the less. And it was eating you from the inside. You were wasting away before our eyes, even though you could eat comfortably. As the weeks progressed, several more complications cropped up. A pressure sore that wouldn’t get better, an inflamed backside (which we curbed with antibiotics), and the stiffness in your joints made it clear you were not going to get better. You were tired, your breathing laboured.

Oh Cookie, I wished that you could have stayed longer with us. I wish it so much so. But to do so would be selfish on our part, because it was clear that you were hurting, and being the tough cookie that you were, you hardly let it show. Because having you for one more day, a few more days, a week, or even months would never be enough for us. We’ve run out of chances.

I’ll miss you love. Thank you for the memories you’ve given us.

I’ll see you again one day.