Today I want to share an interview I did with Caitlin Keegan, author and illustrator behind The Illuminated Tarot. We’re focusing on how Caitlin took her idea that stemmed from a personal project, into one that’s published by Clarkson Potter (available on Amazon). 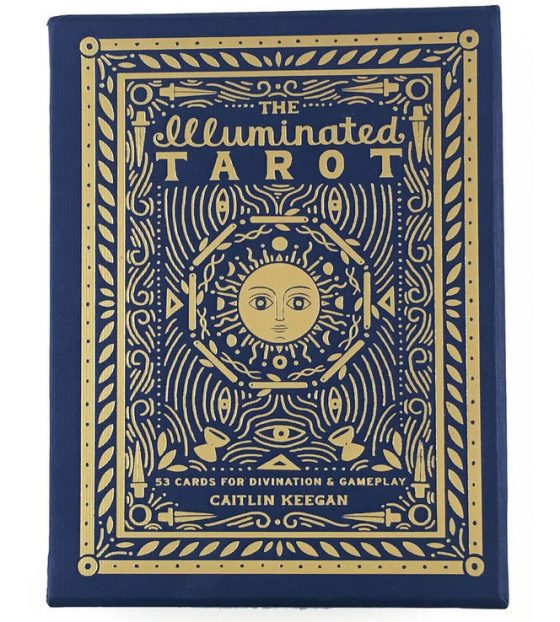 The Illuminated Tarot is beautiful! You mentioned that the idea behind it stemmed from an interest in learning about tarot symbolism and archetypal imagery. Could you tell us a little more about how your project began?

I’ve been interested in tarot since I was a teenager because I felt drawn to the imagery, but I always felt skeptical about the “fortune-telling” aspect. Much later (in my early 30s) I had a therapist who suggested discussing images as a way to ease into bigger conversations. That led me to think of tarot in an everyday, non-psychic context and inspired me to learn more about it. I read about the parallels and historical connection between playing cards and tarot and decided it would be an interesting challenge to make one deck that could be used for both purposes.

Since a playing card deck has 52 cards, I realized that I could create one card per week and have a fully illustrated deck by the end of the year. To make it more fun for myself, I randomly drew a card to illustrate–so every week I would have a surprise “assignment” to look forward to and I would learn something new about tarot. 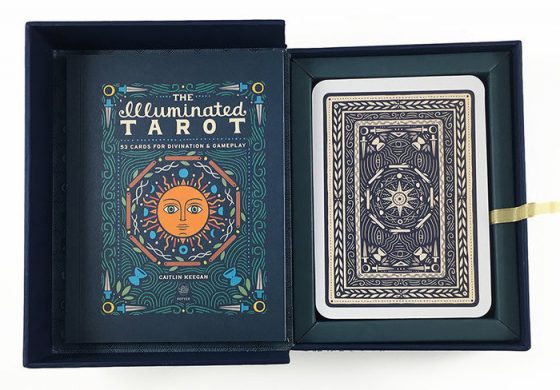 Be very realistic about how much time you’ll want to spend on something. I’m amazed and impressed when artists do daily projects because I know I could never accomplish that on top of other work deadlines. I would feel stressed and that would remove any enjoyment I was getting from the project. Then I would give up and feel bad about giving up– and that becomes a vicious cycle! For me, a weekly project is ideal. For others it might be bi-weekly, monthly, etc.

How were you able to take the Illuminated Tarot from a personal exercise in creating something new every week, to the deck of cards that you now have for sale? How did it go from a personal project to one that’s now publicly available for purchase?

I originally thought that at the end of the year, I would pull together the card images into a book proposal. But I was lucky that Jay Sacher, who I was in touch with through his work for Chronicle Books, saw the illustrations as I was posting them to Twitter. At that time, Jay was an editor at Clarkson Potter, the imprint of Penguin Random House that ultimately published the deck. I’m thankful that he liked the project and could see the potential in publishing it, and I’m thrilled with how the printed deck turned out. 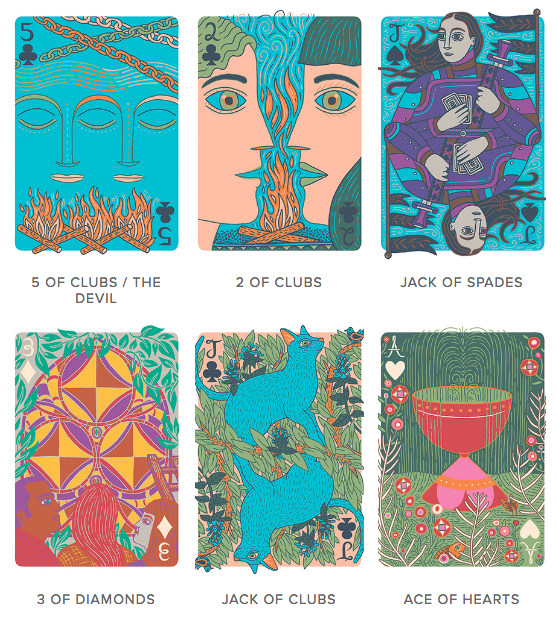 I’ve noticed that you’ve used different mediums in your work – colour pencils and digital renderings. Could you tell us when you use one or the other, and why did you opt for creating digitally when it came to the tarot deck?

This is kind of a boring answer, but it has a lot to do with timing! It’s quicker to work digitally.

A less-boring answer is that I was really inspired by a book I have about E.A. Seguy, a textile/pattern designer from the early 1900s whose work is often grouped in with Art Deco. I just love the use of color in his work and I thought flat, bold color would be a good look for this deck. It has the look of a printed textile and also seems semi-psychedelic, which I see as a nod to the 1960s tarot decks I liked as a teenager.

I’ve since figured out a half traditional/half digital way of working and I’m excited to do more work like that. It’s a less time-consuming way to partake in one of my favorite pastimes: obsessive pencil shading.

How important are personal projects to you as an illustrator?

For me, they’re essential for staying motivated and inspired. 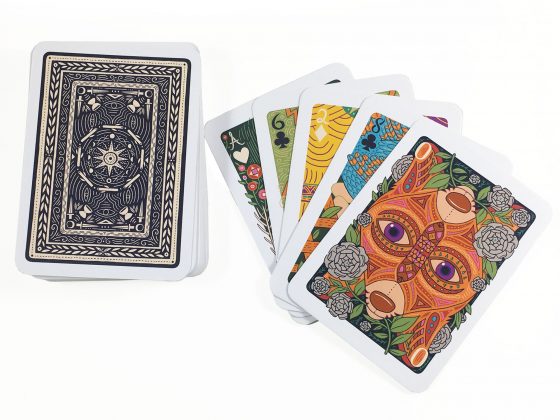 Has working on the project impacted your work in any way?

I think because tarot deals with universal themes, it’s particularly challenging to try and do something new with it. Modern tarot decks very often are reinterpretations of the imagery in the Smith-Waite deck–probably because those images are so ingrained in the memory of anyone who is familiar with tarot. I really wanted to break out of that as much as possible and find my own way of communicating.

Working on The Illuminated Tarot was like a lot like having a weekly editorial assignment. I would break down the card meaning into the simplest possible terms and then illustrate that idea. The process of doing this every week–while also trying (for the most part) to avoid traditional tarot imagery–really pushed me to develop my vocabulary as an illustrator.

I personally think that it’s a very exciting time for artists and illustrators, as they are able to take their ideas and run with it as opposed to waiting for others to collaborate with (which is how a lot of illustration jobs are like). What are your thoughts about that?

Certainly, with social media, it’s much easier to get your work out to an audience. That’s why I hope that we (especially we in the U.S.) will be able to stop those who want to privatize and further corporatize the Internet. Net neutrality is essential for the open exchange of ideas–for culture in general, not just for art. In terms of art and illustration specifically; right now almost anyone can be published online and I think that’s a good thing. The culture moves forward when more of us can be heard.

What’s next for you? Are you taking this project any further?

Right now I’m working on something involving dream symbols and interpretation. I’d love to do more tarot or oracle decks in the future too. I’m also keeping up a weekly surface pattern design project I started in 2016. I post a new repeat pattern every week to Instagram and many are inspired by my visits to museums and botanic gardens around NYC.

You can check out more of Caitlin’s work on her website, and you can get a copy of The Illustrated Tarot on Amazon.

Changing careers: Why it’s not just about following your passion

2 Replies to “Caitlin Keegan’s The Illuminated Tarot: From personal project to being published”