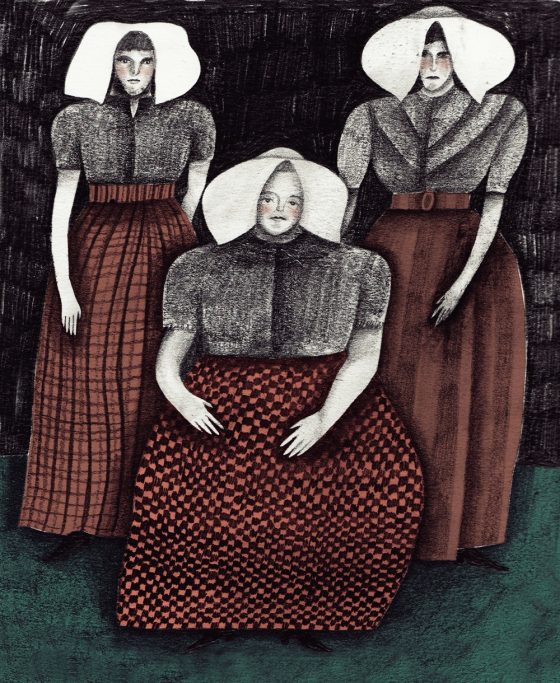 Julia Soboleva is a Latvian-born illustrator currently living and studying in Manchester, UK. A few weeks ago she sent me an email about her personal project inspired by the Ellis Island immigrants, and my curiosity was piqued.

For 60 years (from 1892 to 1954), Ellis Island, a small island in New York Harbor, located within the shadow of the Statue of Liberty, has been a portal for over twelve million immigrants to enter United States. Augustus F. Sherman captured photographs of more than 200 families, groups, and individuals of immigrants while they were being held by customs for special investigations.

My curiosity led to an interview with Julia to find out more behind her project, and I hope you’ll enjoy reading – I felt that the subject is so very relevant, especially given our current political climate.

Hi Julia, tell us how you got started with the project.

Initially the current project wasn’t suppose to be a project at all. During my maternity leave while caring for my newborn son, I was always carrying a little sketchbook in my pocket. So each time my baby was asleep, I was trying to do at least one doodle. I stumbled upon Augustus F. Sherman’s photographs of Ellis Island immigrants. Those portraits were full of character, they showed humans from all over the world wearing their traditional costumes, with the vulnerable gaze and the eyes full of hope. Mesmerized by these portraits, I started drawing them in my sketchbook using just pencil, without any ambition for further development. At that time, being a new mum, it was really convenient practise for me as it didn’t require any special equipment and it was portable and accessible any time. Later on, after doing some research on the history and context of Ellis Island and thinking how relevant the issues of immigration are nowadays I realized that my drawings have a potential to be developed into a project. 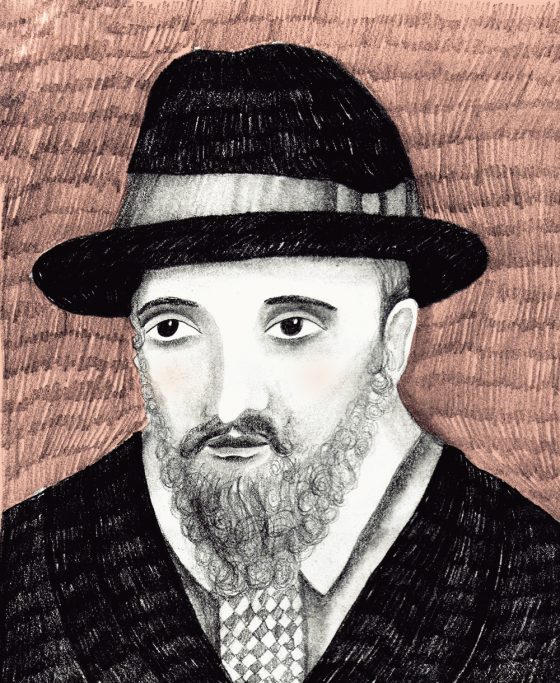 Tell us the story about the people in your illustration – what happened to them?

For 60 years (from 1892 to 1954), Ellis Island, a small island in New York Harbour, located within the shadow of the Statue of Liberty, has been an immigration inspection station for over twelve million immigrants entering United States. The passengers travelling first and second class were considered trusty and wealthy enough to be examined on board of ships, while the poorer passengers were required to visit the island for medical examination for infectious diseases or insanity and legal inspection. Augustus F. Sherman, who worked as a clerk at Ellis Island at that time, happened to be an amateur but highly gifted photographer. Being fascinated by diverse cultural backgrounds of his subjects, Sherman created hundreds of portraits of newly arrived immigrants.

In this context, a personal development, a movement of finding your ‘true self’, the act of getting lost and being found can also be regarded as immigration.

He captured the images of Romanian shepherds, gypsy families, circus performers, Russian Cossacks, Greek soldiers, and women from Guadeloupe. His photographs became a fascinating archive with the compelling insight into this vital period of American history. To add, only two percent of the immigrants were denied entry to the country, and the rest of them made it through the border. Sherman’s immigrants are people in my illustrations. 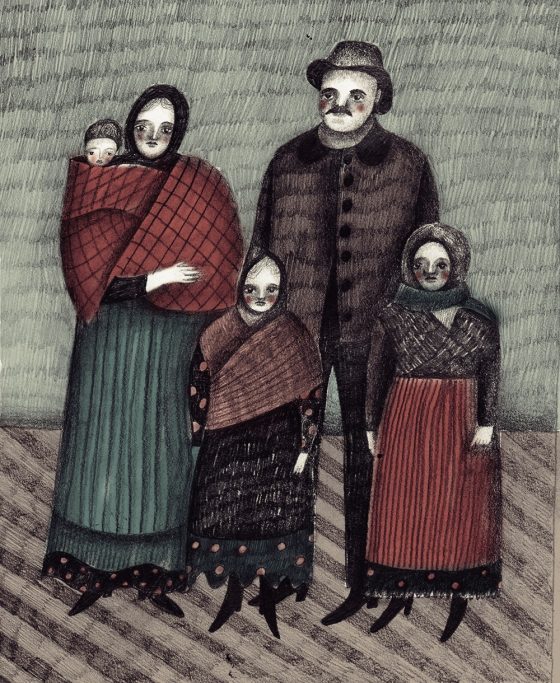 Why did you decide to illustrate this series? Was there a personal connection with the subject matter?

At the outset, the decision to illustrate Sherman’s immigrants was spontaneous. Initially, it was simply supported by he fascination with the photographs and the motivation to keep developing my drawing skills. However, looking deeper into the context of these photographs, I started reflecting on the notion of immigration and how differently this term can be interpreted in different circumstances. For example, according to one of the definitions of the word, immigration is the international movement of people into a destination country of which they are not natives in order to reside there. This definition makes an immigration to be a vital and universal act of human development, search and discovery. In this context, a personal development, a movement of finding your ‘true self’, the act of getting lost and being found can also be regarded as immigration.

There is also a personal connection with the subject as I am an immigrant myself. I was born in Post-Soviet Latvia and being a Russian speaker I was classed as an ethnic minority. Awkwardly, it always felt like I am a lifelong immigrant even in the country I was born. Possibly that is why, when I moved and resided in UK seven years ago, the process of adaptation and cultural adjustment seemed somehow familiar and relatively easy to overcome.

Finally, current political debates on immigration worldwide, which are often quite myopic in my opinion, made the notion of immigration particularly relevant and interesting subject to work with. 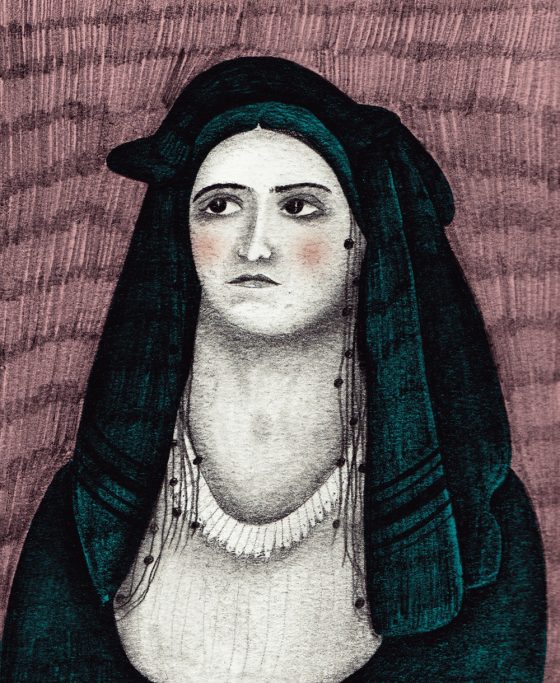 What do you hope to achieve with this series?

I consider this project to be a start-up for further developments, discussions and collaborations rather then being a finished piece in itself. For example, making these series made me realized how much I enjoy working with archival images. Thus, there can be possibilities in future to collaborate with museums and libraries with the archival collections. From the other hand, I hope that my series would encourage open discussions and bring the awareness of the notions of immigration and internationality.

What positive outcomes have come from this personal project of yours?

This project became my illustration resurgence after my pregnancy and maternity leave. It motivated me to upgrade my website and my portfolio and seek new opportunities of collaboration. I also discovered a new fascination with archival imagery and how it opens up a portal for studying the past history and the self within it. I drew my Ellis Island Immigrants using just pencil in a detailed and highly stylistic way, which made me question the notion of drawing in my own practise and what is the role of style in creative process. I am investigating this discourse in my MA Illustration course which I am currently studying in Manchester Metropolitan University. 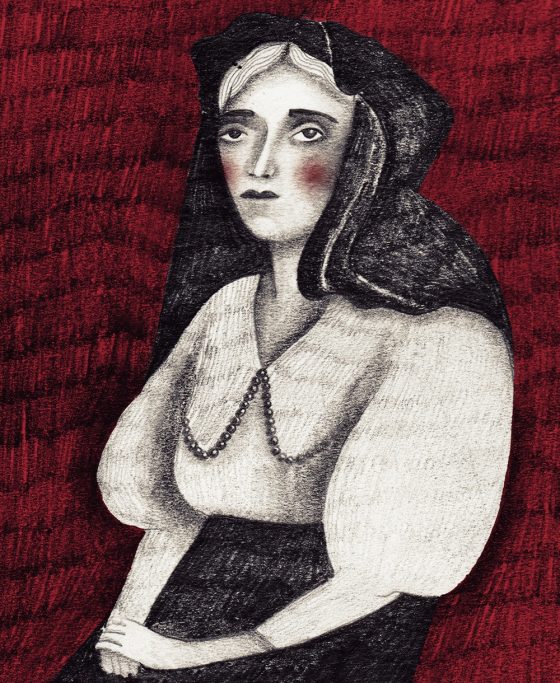 How do you think artists can help when it comes to social issues?

Answering the same question Kurt Vonnegut said, ”I sometimes wondered what the use of any of the arts was. The best thing I could come up with was what I call the canary in the coal mine theory of the arts. This theory says that artists are useful to society because they are so sensitive. They are super-sensitive. They keel over like canaries in poison coal mines long before more robust types realize that there is any danger whatsoever.” It really corresponds with my thoughts on how artists contribute to solving social challenges.

Being extra vulnerable and responsive towards the problematic issues which generally are not talked about and being able to communicate these issues to wider audiences is what makes artists being so vital in our society. Often in our social system, we see how normalization of prejudice and intolerance is left unchallenged. Artists are the ones who challenge the system, bring awareness of its injustice and offer a fresh perspective.

Thanks so much Julia!

Check out more of Julia’s work on her website.