I want to introduce you to Lim Heng Swee, whose illustrations for his brand ilovedoodle has made him a bit of a celebrity within the Threadless community and on Etsy. He’s proof that it doesn’t matter where you live (he’s based in Malaysia) to be able to succeed as an artist – especially when you know what success looks like. I originally interviewed him for my course Work/Art/Play, and I wanted to share this interview with you because he’s one of the most inspiring and generous artists I’ve ever come across. I hope you’ll enjoy the interview – and feel free to send the link to this article to your friends! 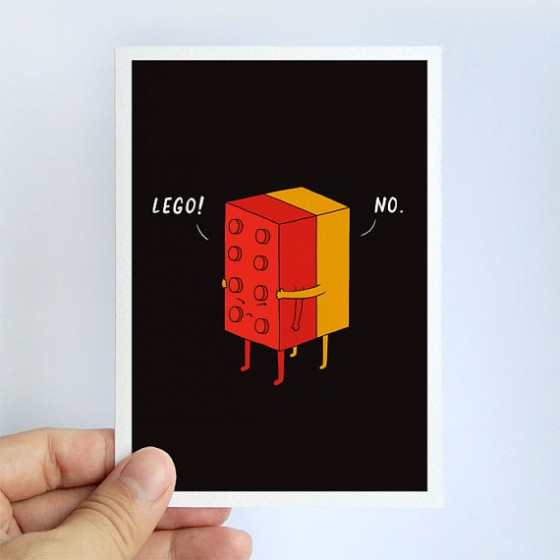 Hi Heng Swee! I find it really interesting that you’ve created a name for yourself through illustration. Tell us a little bit about yourself!

Hi there! My name is Heng Swee and I’m an illustrator based in Malaysia. I studied mechanical engineering but within a few months after I graduated (and took on a job as an engineer), I quit and became a full time artist because I wanted to just draw.

How did you get your start? Did you study art before?

I didn’t study art – I studied to become an electrical engineer, so I’m a self-taught artist. 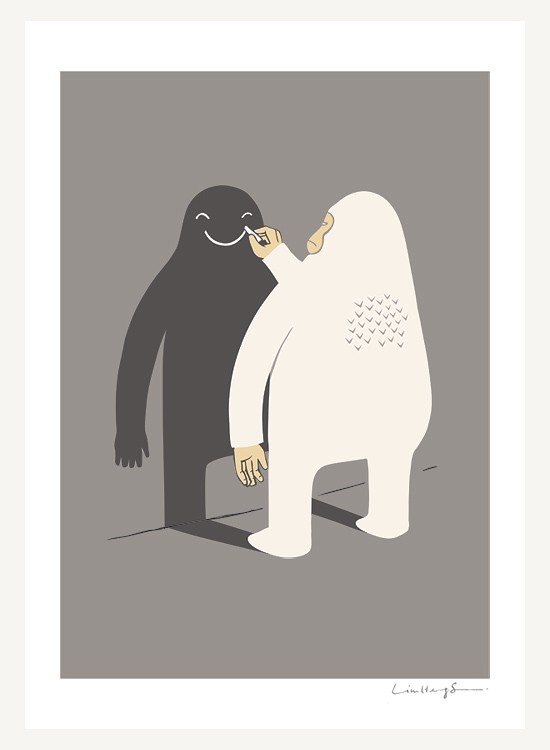 Tell us a little about how you arrived at where you are today.

In the beginning, I didn’t know anyone who needed an illustrator, so I flipped through a few magazines and newspapers and saw that none of them had any illustrations in them. So I studied what they lacked and came up with a proposal to each of these publications, and drew a few strips and illustrations for them to show them what I mean, and to show them what my style was like. I got a lot of jobs that way when I first started out. If you’re just starting out, this is a great way to vet clients because when you do the work first, they’ll know what to expect and will not ask you to change your style to suit them because they can see offhand what it looks like.

You are famous also through your Threadless submissions. Can you tell us how it all began?

I was searching for opportunities for illustrators online as I was about to move to the UK for a one-year working holiday, and wanted to be able to still draw and make a living that way. When I found out that you could earn money illustrating a t-shirt, I was sold – the prize money back then was a big amount: USD2,000 for the winner. I came up with ideas and submitted my work diligently. I created a lot of illustrations on Threadless! 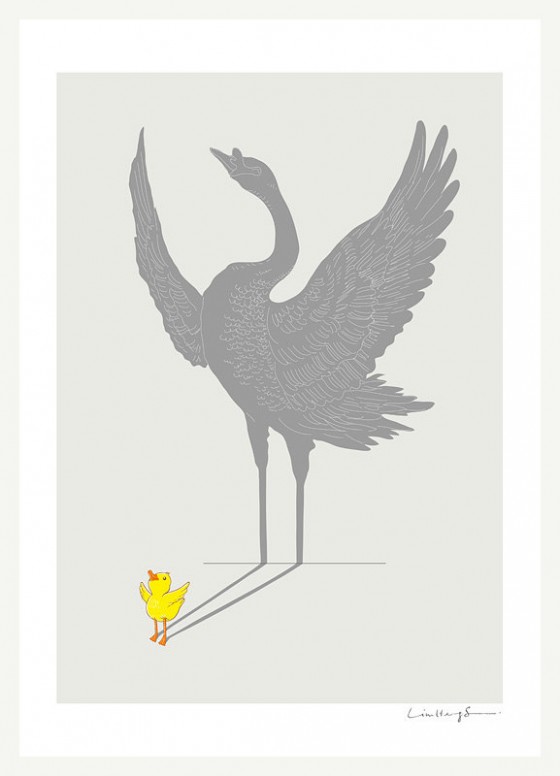 You project “Doodle Everyday” was a big hit – can you tell us the reasons behind it?

Before I started on Doodle Everyday, the only place where I submitted my work was on Threadless. I’ve done a lot of illustrations that were picked by the community in the 2 years when I first started, and it helped me build up my style through the experience I garnered there (the voting, comments, etc). But after 2 years of working on the Threadless platform, I began to feel that I was producing work according to what the masses had wanted, instead of what I wanted. So I started Doodle Everyday as a form of  daily challenge for myself to try out different ideas and themes, instead of merely thinking about what the customers at Threadless would want. I had a lot of exposure from that project – it got picked up by a few major blogs, including Swiss Miss. It was a period of major growth.

How do you come up with ideas for your illustrations?

I always like to think about things – often time mixing things together to form something new. For example, one minute I would think about a penguin, with it being black and white – and then I’d try to link it to something else that might share the same characteristic, which brings me to a piano, with its black and white keys. So then I try to combine these two together in a way, and figure out what do they have in common? What sticks out? That’s how I came out with the “Choir for Antartica” print. I just love to inject a sense of humor into my work. 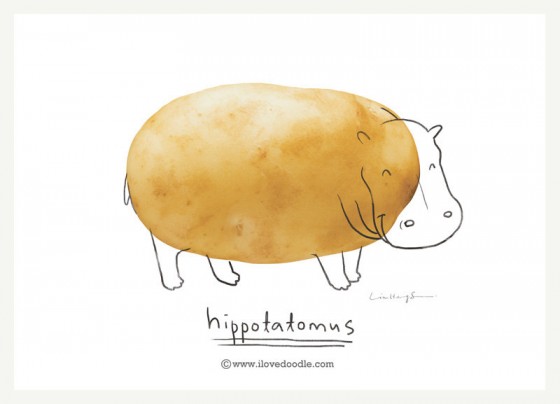 Your Facebook page has more than 80K likes! Can you tell us how that happened?

It all happened organically – but the major growth was due to the Doodle Everyday project that I started in 2011. People signed up to get regular updates and to see what new doodles that I posted up.

Where do you sell your goods? And which outlet has garnered the most sales for you? Is this your main income stream?

So after illustrating for Threadless for 2 years, I discovered Etsy. And I was blown away by the opportunities that it offered artists. I had never ventured into print before, but after seeing how prints were selling pretty well, I decided to open an Etsy shop to sell my prints. Prior to that, I had to depend on winning the Threadless competition to make sure that I could support myself. With the Etsy shop however, I could have a regular income because I could now get my work printed up – I didn’t have to win a competition, and I didn’t need to be picked by anyone. The Doodle Everyday project has created a lot of illustrations that I could use for different items. 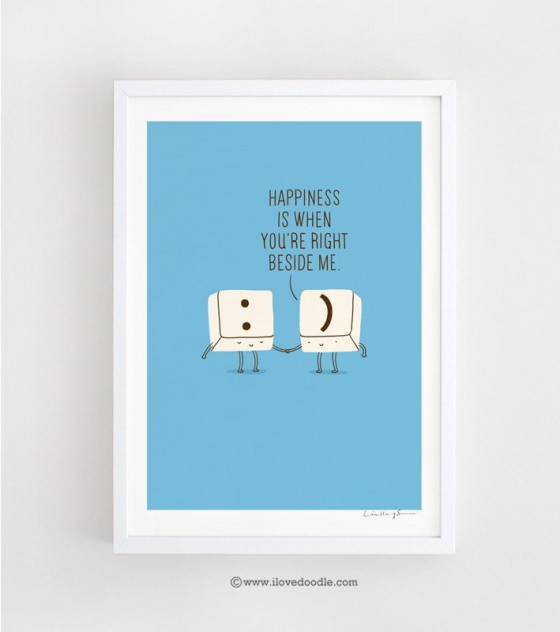 Do you print your items by yourself, or do you use a 3rd party service? What’s your advice for those who don’t know where to start?

I use my own printer to print, as I felt that using 3rd party services was unreliable in Malaysia. With this I could control the quality of the print as well as the type of paper that I could use. I did a lot of online research into which printer was the best, and I couldn’t get good quality archival, acid-free paper here, so I order mine online.

I saw that you also went into licensing – how is that working out for you?

It’s working out great – licensing isn’t my mainstay at the moment, but I have gotten offers for work from China and Hong Kong through being seen online. 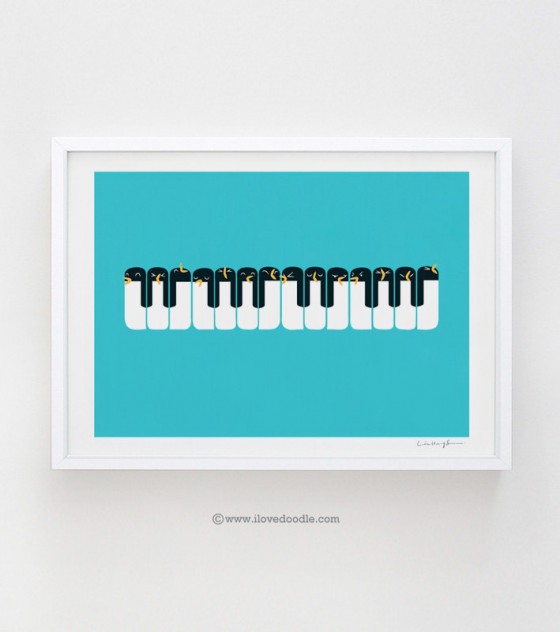 How do you determine your licensing rates?

I usually go by my experience with Threadless (they now offer royalty instead of a prize money) – but it also depends on the scope of the project. I also refer to the book The Graphic Artists Guild Handbook: Pricing & Ethical Guidelines.(via Amazon)

What sort of marketing efforts have you put into promoting your work? What has worked and what hasn’t?

A lot of my work has been through word-of-mouth and through referrals and repeat buyers. I haven’t been actively promoting myself, aside from regular posting on Facebook and updating my blog. I find that having fresh content up on a regular basis really helps to drive interest back to my work.

What would be your advice to other artists out there in carving out your own future and success?

It’s really important to start with what you want out of all this. I like to share this story about a Mexican fisherman, which goes along something like this:

An American investment banker was at the pier of a small coastal Mexican village when a small boat with just one fisherman docked.  Inside the small boat were several large yellowfin tuna.  The American complimented the Mexican on the quality of his fish and asked how long it took to catch them.

The Mexican fisherman said, “I sleep late, fish a little, play with my children, take siestas with my wife, Maria, stroll into the village each evening where I sip wine, and play guitar with my amigos.  I have a full and busy life.” The American scoffed, “I am a Harvard MBA and could help you. You should spend more time fishing and with the proceeds, buy a bigger boat. With the proceeds from the bigger boat, you could buy several boats, eventually you would have a fleet of fishing boats. Instead of selling your catch to a middleman you would sell directly to the processor, eventually opening your own cannery. You would control the product, processing, and distribution. You would need to leave this small coastal fishing village and move to Mexico City, then LA and eventually New York City, where you will run your expanding enterprise.”

The Mexican fisherman asked, “But, how long will this all take?”

“But what then?” Asked the Mexican.

The American laughed and said, “That’s the best part.  When the time is right you would announce an IPO and sell your company stock to the public and become very rich, you would make millions!”

The American said, “Then you would retire.  Move to a small coastal fishing village where you would sleep late, fish a little, play with your kids, take siestas with your wife, stroll to the village in the evenings where you could sip wine and play your guitar with your amigos.”

The story above goes hand in hand with a TED talk I watched about how Stephan Sagmeister brings his ideal retirement life into his current schedule, by taking an extended time off from work every few years to rejuvenate himself and to create a well of information that he could tap into for the following few years. And it goes on and on, like a cycle. He doesn’t believe in the concept of retirement as finite, or something you can only enjoy at the end of a grueling work life. It has to be hand in hand, because work is so engrained in our lives – it takes up a big part of our time, so why shouldn’t it be enjoyable at the same time?

So my advice is to know what you want, and spend your time planning your work, schedule and environment to mirror what it is that you want in life. For me, it was always about drawing – so my choices, and the path that I choose has got to align with my goals of being able to draw.

You can see more of Lim Heng Swee’s work through Etsy, Threadless and on his website.