Matilda Tristram sent me her book, Probably Nothing: A Diary of not-your-average Nine Months, and it’s one of those books that begs to be finished in one sitting (I did it in two, but only because I had to tear myself away for something urgent – otherwise I could have chugged along without caring about the time!) It’s a graphic memoir that recounts her journey – from finding out she had cancer while she was pregnant at 17 weeks, to giving birth to James, and to the end of her chemotherapy. I loved it. It was honest, open, and incredibly real – I could imagine the things Matilda said in her head (you know, the things you wouldn’t say out loud!) I appreciated her humour and openess in expressing her thoughts, especially when she recounts her experience with people who mean well but could do better.

I had a chance to email her about the book, and I hope you enjoy reading the interview below!

Her book Probably Nothing is available on Amazon, and you can see the rest of her work on her website.

I love your book – your frankness and matter-of-factness of dealing with cancer AND being pregnant for the first time is just wow. Can you tell us why you decided to pen all your experience down, and how did it all begin?

Hello and thanks! I’m glad you liked it. There were several reasons; I’ve been writing stories and comics for years, for my job as a children’s author and for fun, writing about life is what I do and love.

I’d never made a diary comic because my day-to-day existence didn’t seem interesting enough, but suddenly it was. It was peculiar and morbidly fascinating (what my body was doing / the procedures I had to undergo), hilarious (how people reacted to my illness) and terrifying (the possibility that my son and I might not survive). That type of fear made ordinary things seem worth writing about. I wanted to record as much as possible in case I died and had to stop experiencing anything. My memories from the time are very clear, I can ‘see’ the wards and consulting rooms in perfect detail and remember exactly how people spoke and what they said. Scenes play over and over in my mind like frames from a storyboard so it was easy to draw. 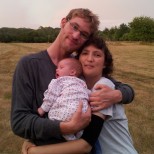 It was also good to have something to do to at hospital, I was there three days a week for most of my treatment, which lasted for six months. It took my mind off the situation, while I was thinking about how to draw or word something I wasn’t thinking about how scared I was.

Penguin offered to publish the comic when I was about six months pregnant, almost halfway through the book. Until then I’d been putting it all online as I wrote it, to let friends and family know how we were doing without my having to have the same upsetting conversations again and again. Talking about it was difficult, but writing and drawing wasn’t at all.

Writing also meant I could gently criticise the way people talk about to ill people without having to confront anyone directly. I know people’s intentions are good, no one wants to do or say the wrong thing, but until you’ve had cancer or know someone who has, you might not realise that, for instance, talking about someone else you know who’s had cancer isn’t very helpful.

I found all the language of cancer, the ‘fighting talk’, hard to deal with too, and used the comic to question that. For example, people want to hear that you’re “thinking positive” when really you’re terrified. A popular belief is that if you think positive, you’re more likely to recover, which is complete nonsense and makes cancer patients feel guilty for worrying.

My diagnosis came quite late; the tumour was large and had started to spread. It was very difficult to get any doctors to take my symptoms seriously and my son and I very nearly died as a result. I wanted the comic to raise awareness so that the same mistakes could be avoided with other patients. 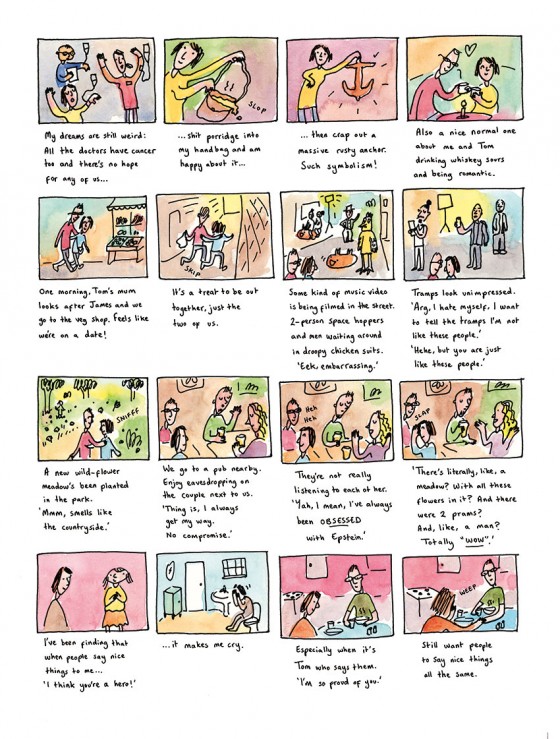 Did you approach a publisher for the book, or did they come to you after you put your webcomics online?

After I put the comic online and then the Guardian newspaper approached me and asked to feature some pages in their magazine. I got a great response from that so approached a few publishers.

How has the response to your book been? Was it what you had expected it to be?

The response has been wonderful. The online comics and cancer communities were so encouraging while I was writing and having treatment, it was great to already have their support when the book came out.

When I read it now, I can’t believe how open I was about some things. I think at the time I felt like if everyone knew about what we were going through I wouldn’t feel so isolated in the experience. I always get emotional when people tell me that reading those really raw bits helped them through treatment or with caring for someone else.

Another response has been relief on finding that there are funny bits in the book. I suppose devastating things can also be very funny. The book is also about the rest of life as well as cancer; friendship, love, family and living in London so it’s not all heavy stuff. 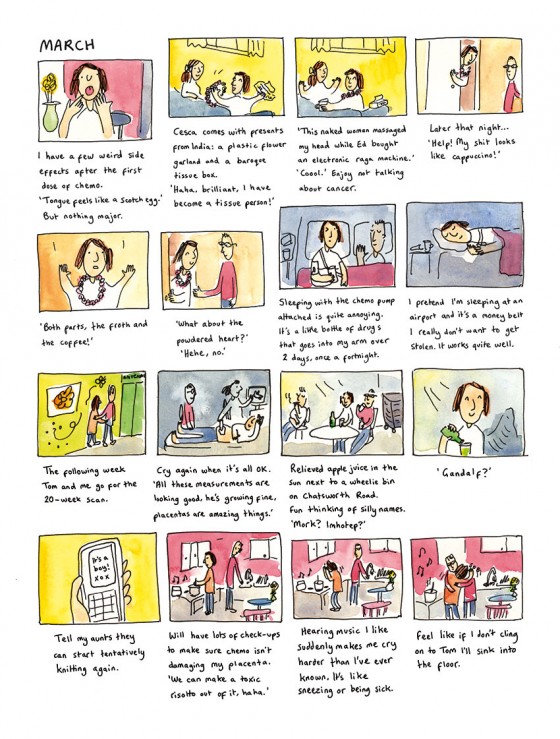 Now that your book is out and people have identified you as the lady who survived cancer while being pregnant – has this affected you in any way? Do you feel as though you’d like to move on, or are you keen to explore the topic of cancer further in your work?

I’m glad to be back at my old job teaching new students who don’t know anything about it, and working on new things that aren’t related to cancer at all.

Although I’m not making more work about cancer, I am enjoying going to conferences and visiting medical schools, to see how comics could be used to improve diagnostic techniques and communication with patients.

What have you learned from this whole experience? Of having cancer, to beating it, to having James, and then this book?

I should have some righteous platitudes ready for this bit, but I can’t think of any! I loved life before I got ill and didn’t need to get cancer to ‘appreciate the small things’ etc… I’ve had a crash course in oncology and been amazed by what my body has endured, how it has healed, and by it’s ability to produce a healthy and happy son on top of everything else. Bodies are amazing. 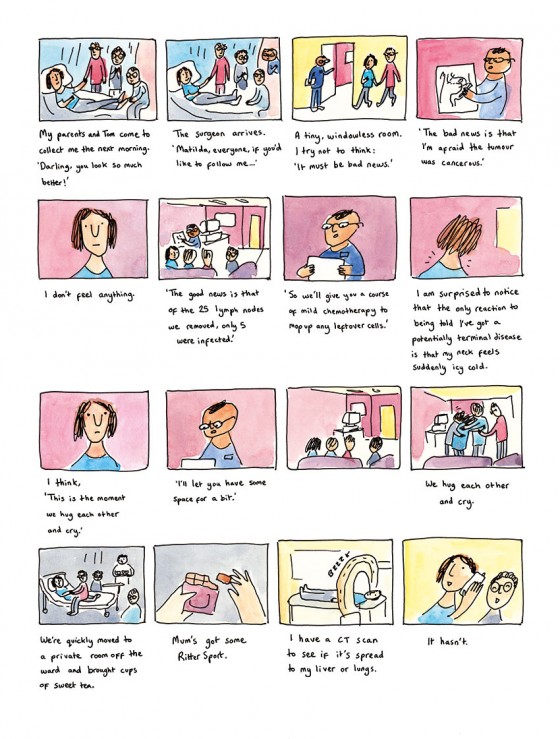 What I loved was when people did things without asking ‘is there anything I can do?’, like bringing dinner, tidying the flat, or dropping off something nice (and non-cancer-related). All the flowers got a bit overwhelming but one friend gave me a rubber peanut and a pencil case with my favourite type of pen in, which was lovely. 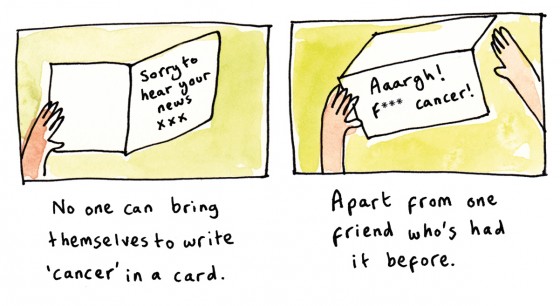 You’re a teacher, animator, and writer – what advice do you have for artists who are trying to make their mark on the world?

Put it all online!

Thanks so much Matilda!

Probably Nothing is available on Amazon, and I highly recommend getting a copy for yourself and/or loved ones who are going through health issues (minor or major) – it’s funny, touching, real (yes, I mentioned this several times already, I know) and best of all, uplifting.