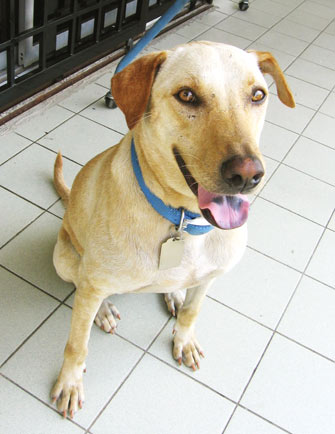 It was to be a typical Friday morning last week – I was wrapping up the last Q+A session of the Work/Art/Play class (and what a wonderful class it was this year).

Bittersweet not only because it marked the successful end of the class’ second run. But because after I put my earphones down and started to convert the day’s recording for the rest of my students who could not join us that morning; I had to leave for my mother’s house to say goodbye to my dog Cookie, who was scheduled to be put to sleep after a courageous fight with cancer.

We diagnosed her six weeks ago – right after I began this year’s session of Work/Art/Play. I burst into tears when the vet told us that she had maybe just a few months to live. We thought she had an upset tummy and it was why she was losing weight. Not cancer. Not cancer, I thought. How does one deal with the idea of their first pet dying? I cried buckets. That day had came for me. For us. It was no longer a looming shadow at the back of my mind as I thought about how far we’ve come. It’s here.

An X-ray confirmed that the cancer had already spread to her lungs, although she didn’t show any signs at all, save for an upset tummy which went away. It was probably for the best, the vet said. There was nothing to be done, even if we had caught it early – it was aggressive, and surgery was never an option because of the risks involved. Even a biopsy was too risky.

For the last 6 weeks, everyday I told myself – one day at a time. One step at a time. Perhaps it was just me talking myself through as I walked my class through the modules. It was a phrase that I had mentioned often, and not to myself, but to the rest of my class as they went through the paces of taking down walls and rebuilding a new, firm foundation for their art and business.

One step at a time. You’ll get there.

My mother and I took turns to look after Cookie, and in that past 6 weeks we saw her deteriorate before our eyes. I bought Chinese herbs as an alternative measure in the hope that it would help her with pain, or to slow the process down. We formulated a new diet for her, to make sure that we were feeding her and not the cancer. She slowed down, and lost more weight. Everyday I would worry about her. Did she get enough to eat? Is she cold? Is she in pain? Her new favourite spot was under the car, where she would spend hours lying on her side; instead of coming out to wreck havoc on the garden or to gallop about happily when it came time for her walks.

I thought about life, and death. Of how it was a circle. And that there could not be life without death. But it didn’t work. I was a ball of mess, snot and tears every week. I thought about how unfair it all was. Our family always thought that our older dog, Bessie would be the first to go, because Cookie didn’t seem to have aged at all in the 10 years she’s been with us – she was sprightly, hardy, and strong. We weren’t prepared. It felt like someone punched me in the stomach. It was hard.

One step at a time. You’ll get there.

Early in the week I had made arrangements with the vet to come over, as well as the caretaker. I had to stifle my sobs when I called them, digging my nails into my skin to compose myself. I allowed myself to cry when I felt the need to let it out when I was alone. My sadness came in waves and heaves. I cried out of regret, of sorrow. I cried at not having more time to spend with her. But of all the range of emotions I felt, I never felt guilty, because our family gave her our best. Food, shelter, walks, love. She had it all. She was a lucky dog. We were a lucky family to have her.

Everyday I would whisper goodbye – because I never knew if it was ever our last day together; if she did pass at night.

I made it. We made it through.

I penned down my thoughts in a letter, which I wrote after she passed. It helped me greatly to put down into words what I remembered fondly about her. It’s a little personal, but if you’d like to read it, you can do so by clicking here. If you’re a pet lover, do share your stories with me this week – I’d love to hear yours.

17 Replies to “Of beginnings and endings”