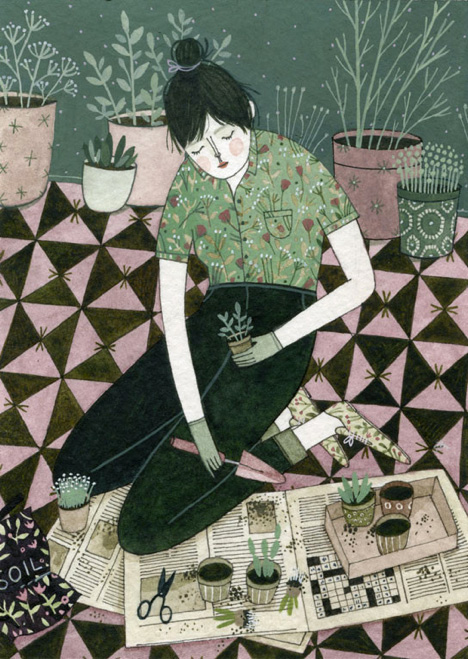 A few weeks back, I was obsessed with growing my own herbs.

You should have seen me – I was way into it. I love herbs and while I buy mine at the supermarket when a recipe calls for them occasionally, the thought of growing it myself never really occurred to me. That was until I caught episodes of Jamie Oliver doing his 30-minute meals. I have to say; watching him going about in the kitchen, snip-snip-sniping away at his herbs whenever he needs them really just flipped a light bulb in me – not only did he inspire me to take more initiatives to cook more, he made me interested in creating my very own herb garden. Watching that show also made me feel like I could do anything at all too, if I maintained a sense of fun and curiosity about it. I’m hoping one of these days to do a full vegetable patch, but with two jack russell terriers tearing around my garden, it doesn’t seem likely that it will happen very soon!

So I had Mr. T buy big packs of potting soil (because using the rather unfriendly looking reddish-clay earth we had in the backyard yielded poor results too many times to be a coincidence), and we had plastic cups all ready to go for germinating. I bought seeds of herbs that I liked – and as with anything I start, I did it with gusto.

After I sprinkled over my seeds of sweet marjoram, dill, rosemary and sage – all in individual pots – and stuck ice-cream sticks with the plant’s name on a washi-tape (because markers on wood looks icky when it gets hit by water). I gave myself a pat on the back and stood back to marvel at my handiwork. Hurrah! Then the waiting began. I watered them everyday, and looked at them in the morning, and once again in the evening. Nothing. All that stared back at me was black soil. I had hoped for a glimmer of green to peek through. Nada.

I waited and lowered my expectations. I peeked in nonchalantly (and yet hopeful) for a week before I spotted something popping out from the fresh ground. YAY! A quick glance over my other 3 pots of herbs however, signaled a nay. Maybe they weren’t  ready to come out just yet? Maybe I got some bad seeds? Maybe the ants got to them in the middle of the night. Or slugs munched on them maybe? I don’t know. All I know was that my web browser history is ridden with gardening vocabulary, of the amateur sort, trying to figure out what went wrong.

Which got me to thinking. Creating anything – work, art, writing, etc – is almost like growing your own little garden. The same goes for businesses too.

You can sprinkle your seeds of imagination and ideas and be careful about them – judiciously watering them, feeding them, talking to them – but sometimes they don’t turn out the way you want them to. Which is why you spread them all around, in different pots, in different forms: through seeds, new cuttings, or the bulb of an old sprout. Some may take root and grow upwards, strong and tall. Others don’t take, and ends before they begins. Some grow new shoots, only to be eaten by a passer-by snail; leaving only the barest of signs of being grisly eradicated before it could fully form.

Creating anything – work, art, writing, etc – is almost like growing your own little garden.

And once you get these seeds on the ground, all you can do is wait. And water them. And wait again. And this process repeats itself as it grows; needing a complex combination of efforts to not only keep it stable, but to allow it to thrive and bear fruit.

It’s a nod to the universe in so many parallel ways – your labor of love is as complex, and yet while you can control a big portion of it, the rest is up to fate. One hopes for the best, and yet prepares for the worst. It’s a little dance in which you won’t know how it all will turn out; but one thing’s for sure: if you keep those seeds hidden, locking them away from soil and sunshine – you’ll never know how it all turns out.

So toss your seeds – your ideas, imagination and creativity – into the ground. Let them take hold and burst through the ground fresh and alive with hope. And what if it doesn’t turn out? Well, then it’s time to plant new ones.

Just remember to add water and love. And watch out for those sneaky slugs.

P/S: Here’s my dill (the only one out of four herbs that made it!) I’m replanting new seeds – and this time I’ll know what to watch out for. 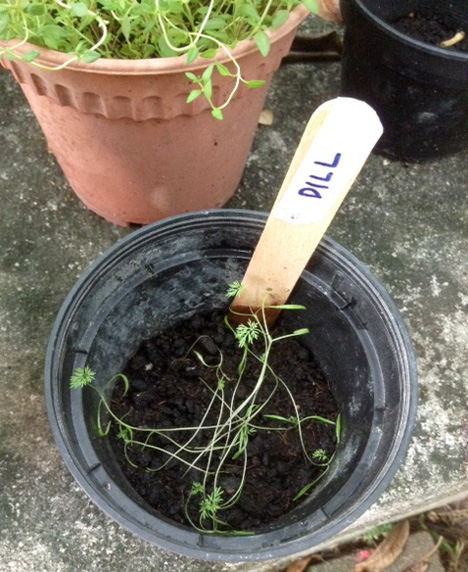 [Illustration: “Green Thumb” by Yelena Bryksenkova via What You Sow – an excellent online shop for all lovely gardening related things.]

I’m very much for the interesting juxtaposition of things old and new. And sometimes once in a cold, blue moon, I see something that just makes me laugh till my sides hurt and cry “why didn’t I think of that in the first place?!”

The work of James Kerr of Scorpion Dagger has this very effect on me.

The premise behind his ideas are simple: he uses characters from Renaissance paintings and makes them come alive through animated GIFs. In ways you wouldn’t expect, and typically not in the fashion you would think. Niceties are out the window, and in comes the culture of the 21st century, embodied by characters who belong in museums (who look much too solemn to be twerking, you say? Prepare to never look at a painting the same way again.)

On being a self-taught artist:

I don’t necessarily have any formal art training, I actually studied History and Political Science in University, but have been making art in one capacity or another practically my entire life.

On where his ideas come from:

My ideas pretty much just come from silly thoughts that I have.

On how he creates his GIFs:

Once I’ve decided what I’m going to make, I start looking through paintings to pull out elements that I think would work best for that GIF. It’s then cut, paste, animate in Photoshop until the GIF is done.

[Quotes from We are Visual Animals] 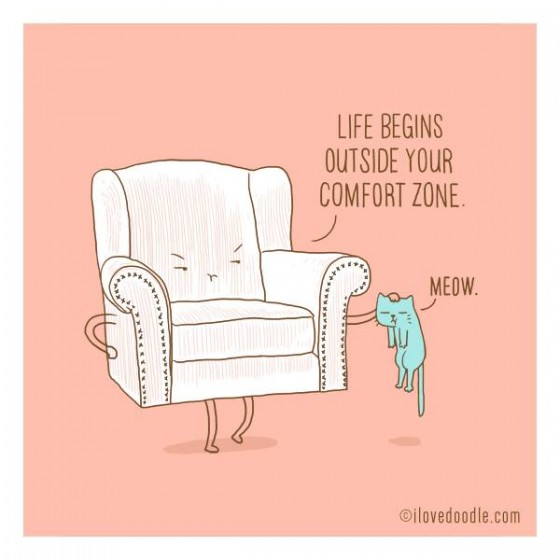 I was speaking to a fellow well-known artist the other day – it was the first time I met him after conversing through email for the longest time. And it was just brilliant. I always love meeting new people – even though the relationship wasn’t technically new, the experience of meeting someone for the first time is something I treasure, because of the wonderful little surprises I know that lies in store.

Whether it’s nuggets of advice and inspiration, or a forging of new bonds; my mind just buzzes with excitement at the thought of hands that are extended in friendship, and where a new thread becomes interwoven in the colorful fabric that has become my life.

So we sat down and talked over lunch, and the more we talked, the more I was fascinated at his ideas. “All I wanted to do was draw,” said the man who turned to art after studying to be a mechanical engineer. “And now I can.” It was inspiring, and to which I thought was incredibly zen-like. My head was brimming with ideas on how he could take it further, and I told him what I was thinking of. He just shook his head and said “I’m happy at this point of my life – I am doing what I’ve always wanted to do. I’m drawing, and I’m earning a living for myself and my family. I don’t have to go big. I’m happy.”

If contentment had a face and a voice, it would be his.

His name? Lim Heng Swee of I Love Doodle.

You’ll be able to read more of our conversation through the Work/Art/Play online course that starts in September – sign up for more details when we launch in a couple of weeks!