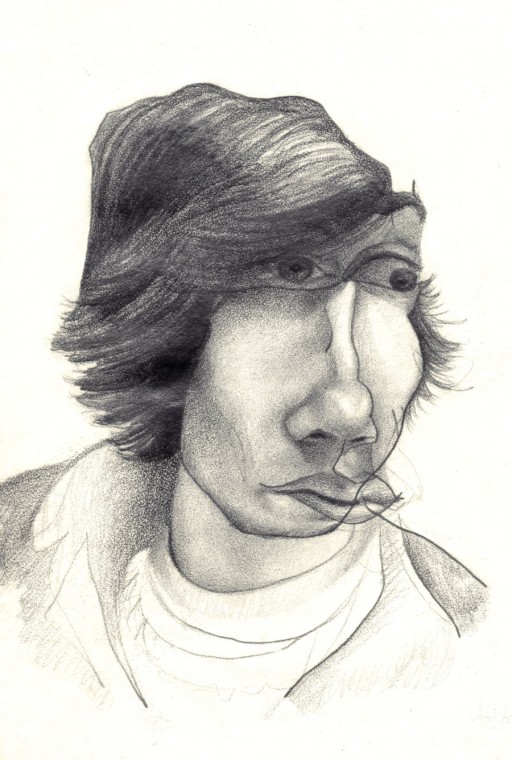 I did an assignment with my class the other day. I asked each of them to go and wash their hands because – get this – they’re going to be feeling their partners up. Without wanting a law suit on my hands (not a sexual harassment suit either) it was to be limited to faces, and whatever body parts that stood out (pardon the pun!) in their personality. So anything goes really – as long as things stayed decent. We were going to do a variation on blind contour drawings.

From Drawing from the right side of the brain, Donna Flood:

Kimon Nicolaides, in his 1941 book, “The Natural Way to Draw,” shows the pure contour method to improve a student’s use of both senses, sight and touch. He asked that they imagine they were touching the form as they worked. To go a step further on the tactile thought it was my practice to take an actual object of whatever the class was drawing. Pass the object around to the students and with touching it there was a stronger communication to their brain as to its qualities whether, soft, hard, furry, bumpy, crumbly, etc. For instance, right around you, the keys on your computer are hard, so is the material on your mouse, also the desk in front of you is hard.

At first I told them that it was fine to look at what they would be sketching, while touching their partner’s face at the same time. And what came out from that was nothing special – there was no spontaneity, and instead there was a lot of “should haves”; things that looked like they were supposed to. Roars of laughter filled the classroom as they began to touch each other for the first time (I’m just guessing here!)

As they got more comfortable, I gave them another experiment – that they close their eyes as they were feeling their partner up, and not look at what they draw (as opposed to having their eyes open and looking at what they were drawing.) The results were amazing.

So much of what they were drawing before their eyes were shut were rigid, and focused on stylistic elements that the students were used to. In their minds they had an idea of what an eye looked like. An ear. A nose. Hair. And they allowed their hands to conform to this idea that was in their minds – and they were frustrated at the result.

If you think about what you are drawing too much, you are likely to let your logical thinking brain tell you what it thinks the subject “should” look like. This is where a good deal of bad drawing comes from. When you draw a bad representation of something, it’s because you are drawing what your logical brain “thinks” the subject looks like and not what is truly there. To draw a subject accurately, you have to draw what is really there. Blind contour drawing makes your logical brain shut up for a while. It can’t try to step in and correct what it can’t see and it can’t see what your hand is drawing. So the outcome of all this blind contour drawing will be that your hand will learn to draw what your eyes are truly seeing by feeling the lines and angles of the subject. In addition, you will be recreating what you see on a different plane than your subject is in.

Prior to the exercise, a few students told me that they couldn’t draw, and that their work isn’t great – but what I saw was different. When they did the second exercise with their eyes closed, their lines became more fluid. It was unhurried, with lots of detail, and a sensitivity that wasn’t there before. The difference between their two drawings were shocking, at least to me; and I think they were surprised that they produced lines they only thought was possible by others; not them.

Now if you think that it wasn’t such a big deal, think of it this way: all those great sketches that you see online of artists sketchbooks? How many of you have wondered why yours don’t look at all like them? I bet my classroom at that point thought the same. But what came out of the second exercise was astonishing – their sketches were relaxed and confident. All of them. Well the ones who kept their eyes tightly shut and didn’t cheat anyway!

Remember when I was musing about how drawing reminds me of swimming? I told the class this little analogy before the class and most of them scratched their heads. They couldn’t quite imagine how it felt – and I didn’t blame them! After the exercise ended though, I asked them again, and they started to understand what I meant. The weightlessness of not knowing what would happen, and how working with your hands to allow yourself room to float without a care in the world – or to put it succinctly, the art of letting go.

The trick is to master this even when your eyes are open, and that’s when you’ll find yourself akin to soaring in water.

If you did this experiment, I’d love to hear and see your results! Post them up on Flickr/Facebook/Instagram and send me the link through the comments!

[Image above: Shaded blind contour drawing by Kyle on Deviantart]

If you like reading this post, think of all the goodness you could miss out on, just because you’re busy! I’ll make it easy for you to keep up by sending you an email once a week when I write something new. Cool? You can sign up over here!

Why do you do the things you do?

6 Replies to “Creative exercise: Close your eyes to draw better”