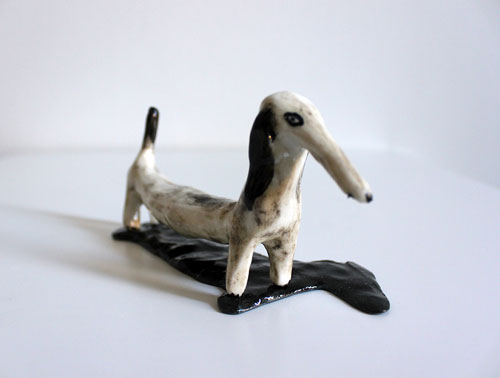 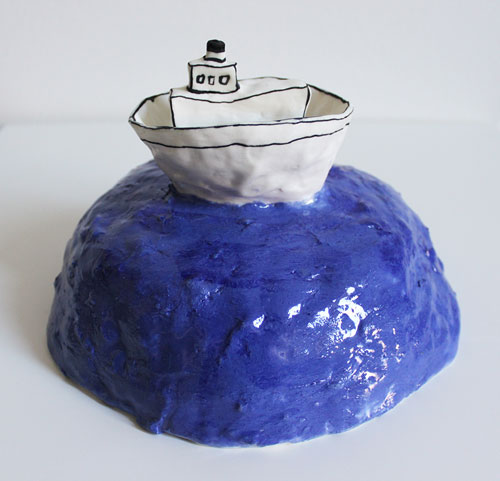 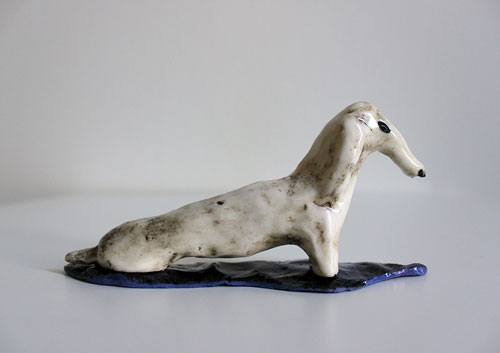 I’ve a soft spot for ceramics, so when I know of a show that’s opening online where I get to gawk at limited edition pieces, you can bet your Wacom tablet that I’ll be there.

Right now there’s a new show up at eyra, and it’s an exclusive ceramics-only show by Eleonor Boström that features, boats and dogs inspired by her old canine. She’s a ceramic artist from Stockholm, Sweden who currently lives and works in Berlin. According to Eleonor, her inspiration for the show ‘Lost Dogs’ “comes from childhood cartoons (many of them made by Per Åhlin or Don Bluth), the sea and my old dog Tess.”

There’s more over at eyra’s website, and these collectibles are up for sale starting today! 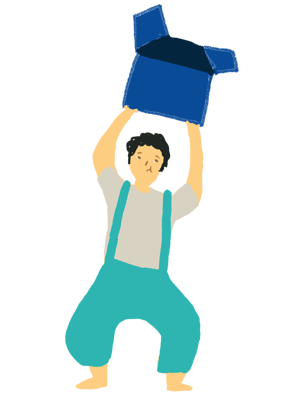 It’s been a week since I launched Work / Art / Play – an online class for artists and illustrators to help them find their footing in this big bad digital world; and the response has been amazing. I’ve gotten so many responses from artists and illustrators who took the time to send me an email, telling me how this has been what they’ve been looking for (and why the heck was I keeping it from them for so long!) So thank you readers – I’m touched beyond belief, and can’t wait to start!

One of the core messages in my upcoming class was that it’s time to do things differently. And that means it’s not just about up-ending the competition. It’s not about tweeting your fingers off every hour of everyday with news about that same new painting, or sending in that fourth application to an illustration annual. It’s more than that and I’m going to lay down 3 harmful myths about self-promotion and why it’s time you did things differently.

Tweeting about your offerings 24/7 into the wide open world is not going to cut it. You might trigger a response (if you’re lucky someone notable stumbles onto your tweet) but for the most part it’s like shouting into a barrel and hoping for a response. Social media is merely an amplifier for your marketing efforts and is a way to connect with others on an informal level; but it’s not the whole picture (unless it is, and if it is, then you’re in trouble).

Myth #2: Postcards: the more the better. I need a fancy logo and name card that people will remember before I promote myself.

This is a misguided effort at best, and a time-staller at worst. Sure, creating the best name card so that people will remember you is a noble effort – but ultimately people will remember the person, not a name on a card. Even if it was printed with gold leaf on a scratch-and-sniff card.

Handy hint: As long as your name card is legible and carries an example of your work or your message, it’s time to hustle!

Myth #3: Emails don’t cost a thing. I’m just going to send one to everyone I know with a blind carbon copy (Bcc).

Again. This is just lazy, and just like shooting fish in a barrel. Would you send out a mass cover letter and a generic resume in hopes of landing a job? If that’s what you’ve been doing (no, no, no) then it’s time you stopped and put a little more effort into putting yourself out there.

Handy hint: Use names if possible. Most of the time you can do a search and you’ll find the person you want to reach, and avoid the possibility of being binned.

The biggest takeaway from all this, is how artists and illustrators need to stop putting their hopes on others, and take concrete steps to claim responsibility for their actions. So many marketing strategies out there hinges on other people’s responses instead of how you can deliver your message and story better.

And how did I know all of this? Because I’ve been on the receiving end of the above strategies. Frankly, after 6 years and hundreds of emails, it’s getting a little ridiculous, to the point where it has become a personal pain point, rather than something to be tolerated. Things can be better. You can do better.

So if you think I’m going to be advocating that you send in more postcard mailings, or take a spread in that fifth illustration annual, or to put up your portfolio up on that illustration portfolio site – I’m not. These may work for some, but ultimately it leaves too much to chance. Remember, it’s not about out-doing your peers, it’s about doing things differently in order to succeed.

And this is just a small part of what I’ll be focusing on in Work / Art / Play. If you’ve been doing things the same way without much to show for it, do yourself a favor and check it out – it might just change the way you look at your work and your business. Enrollment ends on 8th September 2013, and class begins 16th September.

Although I’ve laid out the points above, I know that there’s always an angle that I’m missing, an opinion that I’ve not heard. So I’m curious to hear from you – have you used the above strategies and has it worked for you? Tell me your findings in the comments below!

And if you haven’t signed up for the mailing list yet – do join in! You’ll get a weekly newsletter and special members-only updates with ideas, tips and advice on how to spread your wings no matter if you’re an artist or illustrator (or both!)

When I had started teaching at a local college about the creative process of illustration, I found myself talking a lot about the entrepreneurial aspects of it as well. It didn’t matter if your skills were the best on the block – if you didn’t know how to make the best of it, well then you’re not going to get far.

But so many artists and illustrators get it wrong. They think that if their work is good, then it should speak for itself. They think that if they weren’t getting picked up by clients, publishers, buyers, etc., that it just means that they’re not good enough. And so they try, again and again – and somewhere along the way they get lucky – they get picked. Fueled by the acknowledgement, they work harder, only to have their confidence plummet again because they weren’t picked, unlike before. They start to find a part-time job. Money is tight. Their passion dwindles. They eventually settle for a full-time job that they loathe. “It’s only temporary”, they mutter. But is it?

I’ve contemplated on heading back to a full-time job when I first started out as a freelancer. The pressure was too much during those first couple of years – I had a mortgage and bills to pay, and there were essential things that I wanted to save up for. A fridge. A washing machine. There were days when it was great, and there were also times when the thought of not knowing where my next income might come from made it hard. But each time I stared at the classifieds, I felt my heart sink. Each time I put it away.

I never did get a full-time job after all, only one part-time gig to tide me over a few months, and I have never looked back for the past 4 years. It was only from my second year of freelancing did I start to reap the rewards that I’ve so carefully sown from the beginning. A lot of it was about relationships – ones that I never stopped cultivating, even before I left the corporate world. I made new contacts, which lead to even more work, which eventually snowballed to even bigger opportunities. I’ve carved a name for myself in a niche industry. I’ve come to a point where I have to turn down projects, lucrative as it may be so that I can pursue what I love: teaching.

And today marks the day where I launch my first solo online class for aspiring artists and illustrators who want to find their footing in this big bad digital world. So starting in September, for 6 weeks, I’ll be guiding artists and illustrators on how to hone in on their style and story, and how to turn their skills into a viable business while having fun along the way.

I’ll be teaching you the things that I’ve learnt along my journey, along with the results of my careful observations of artists and illustrators over the past 6 years. I’m going to touch on marketing (and no, it’s not a dirty word) and how the spirit of generosity will create not only goodwill, but massive opportunities for yourself.

I’ll teach you how to recognize opportunities and hunt them down (without making people cringe at you!), how to differentiate yourself from the sea of other talents out there, how to build your presence effectively, how to self-promote fearlessly and how to make money from your art.

Ultimately, I want to provide you with skills that are future-proof. Skills that can stretch far beyond what you believe you’re capable of, so that by the end of the course, you’ll have your very own road map and strategies to create great work, and the ability to find opportunities and income wherever you go and whatever you do.

If this is something that you’ve been looking for, then I invite you to come check out Work / Art / Play. It starts from 16th September 2013 and enrollment is now open for 3 weeks. I’m really excited about this class and I hope you are too!

What strategies did you put into motion that has helped you along your way to becoming a more successful creative business owner? What advice would you have to share with others so that they can avoid the heartache that you went through?

[Illustrations on the Work / Art / Play site is done by Susanne Low!]