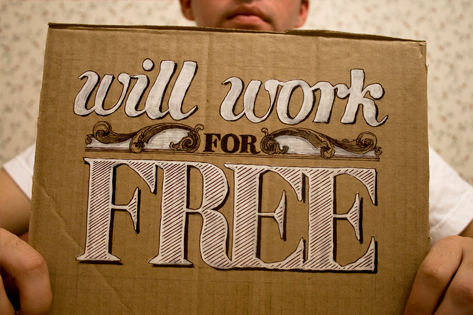 People are surprised to hear that I sometimes give away my time for free.

I’ve done pro bono work for charities and have entered into fun pitches where I worked in collaboration with web designers/programmers. I sketch for people, and have created some illustrations for select projects too.

No, I’m not bonkers. I just feel that the more I give, the more I receive. I do not think that giving my work away devalues what I do at all. Because when I give my work away for free, I think of it as a gift from me, to whomever the recipient may be.

You see, I am extremely lucky to have been on the receiving end of such generosity – either from friends or family members (I’m looking at you, V) – that I feel that the best I can do to give back is by paying it forward. If only to remind the world that the kindness of strangers is not just a myth. And that there is still hope for genuine warmth and generosity in spirit.

But how, you ask, is the best way to navigate these choppy waters?

Here’s a simple guideline that I subconsciously adhere to whenever I try to determine about giving away my work for free, and it’s something I share with those who ask:

1. Do it for yourself
This is top on my list – I give things away to improve. I wrote and sent short little articles to the local newspaper when I was a tween. I even drew pictures and sent them in (some of which, to my delight, got published!). I did it because it seemed fun at the time. While I never had publishers knocking on my door or monetary remunerations, writing helped me articulate things better, and when I drew I just know that it was so much fun.

I participated in a collaboration once, where a team of developers needed a logo to go along with a certain web application. I whipped one up and it was fun to see the whole team getting excited about it! It felt good to be able to contribute to a team environment – especially where I had no programming chops to offer – and I would do it again in an instant.

But here’s the thing. Some people assume that because you’re having fun, it should be reward enough. This is insulting on many levels (yes, they might have pointed out the obvious, but they don’t need to rub it in) but the point is that such behavior is condescending, rude; and should not be tolerated.

2. It’s for a good cause.
I raised my hand to help out a charity organization with a logo for their new fund-raining and awareness campaign. It felt good, I learned quite a few things along the way and it helped me build connections.

3. You like the person.
It’s super simple, this one. Maybe I’m too generous – but if I like someone and we clicked, I’m more inclined to say yes. Maybe I like their idea. Maybe I like their cause. But most probably, it’s because I want to show my support, especially to those who might not be able to afford what I am able to offer right there and then. I’ve also done barters with a few acquaintances, and instead of paying cash, we exchange things or services; which is tremendously helpful if the barter was out of a mutual need!

4. You have a bit of time to spare
Now, this one doesn’t happen very often (the part about me having time to spare), but instead of filling my time worrying about paying the bills, I’d rather have something to busy myself with (but only if point #1, #2 & #3 applies!) so maybe you might want to think about it from this perspective too.

So don’t worry about giving away your time and skills for free. You just might be surprised at what you’ll get back in return, especially when you least expect it.

Share with us: what would it take to give away your time and expertise for free?

{image courtesy of Widgets & Stone, of Brian Wleklinski. Read his interview why he took on a non-paying internship here.}