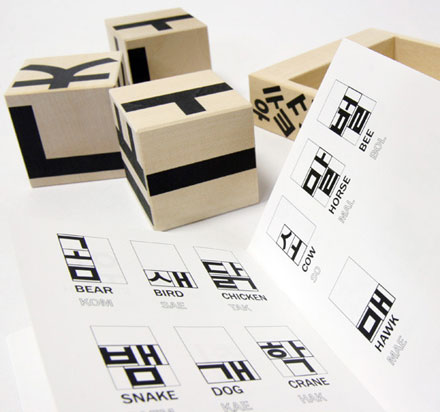 There’s something about foreign languages. The way they can make you look at things in a completely new way – especially if they’re made out of symbols and shapes that you aren’t familiar with on a daily basis. The Korable Block – a word play on “Korean syllable” was designed by Si-Yeon Min – a New York City-based designer, and consists of four wooden blocks hand-printed with Korean alphabet characters.

Si-Yeon designed the blocks as a fun way for his son to learn Korean through interactive and creative play. The blocks can be combined to create over 120 single-syllable words – think of it as a Korean alphabet tangram! The blocks help to stretch the creative capabilities of the mind further as opposed to using images and alphabets that we’re familiar with. 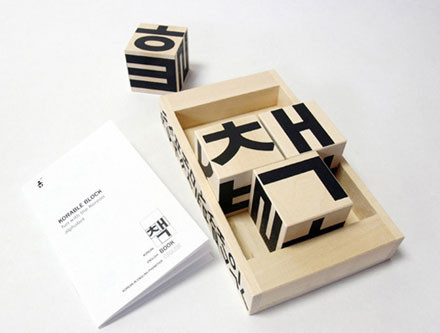 I’ve been curious about the Korean language for a while now, and while I’m having fun trying to piece the pieces together, I also think of the blocks as patterns (those symbols are so pretty!) – making the puzzle-solving slightly tricky at times, depending on what hat I put on that day.

The Korable Block has a bilingual instruction booklet, and more words (that you can put together) can be found on their website as a downloadable PDFs. They make great gifts (just in time for the upcoming holidays!) – not just for kids, but for those who love to give their minds a bit of a stretch as well.

You can purchase it directly over at The Korable Block shop (where you can see a video of it in action!) along with other products that Si-Yeon has designed.

One Reply to “Review: Korable Block”